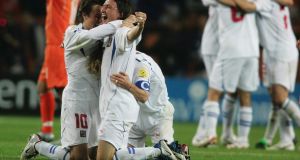 The thing about groups of ‘death’ is that the stakes are often so high that the games everyone looks forward to turn out to be massive disappointments; dour affairs with both sides desperate not to end up on the losing side.

And so it was with a mix of surprise and utter delight that the 30,000 or so lucky enough to be inside the Estadio Municipal in Aveiro on June 19th 2004 watched the great battle between the Netherlands and Czech Republic unfold before them.

Perhaps Germany screwing up a couple of hours earlier against the Latvians up the road in Porto had relieved a little of the pressure but both sides came out with all guns blazing and what followed was one of the most enthralling contests in the history of the competition.

The Czechs threatened to score twice in the opening couple of minutes but it was Wilfred Bouma who actually got the game’s opening goal after four and the Dutch were two up after 19 thanks to Ruud van Nistelrooy. At that stage, it briefly seemed that they were on the way to a memorable victory.

Jan Koller got one back for Karel Brueckner’s side, though, after which the coach decided make a bold intervention with Vladimir Smicer introduced for right-back Zdenek Grygera as the tactics were changed and the team went to 3-5-2. The switch gave Pavel Nedved the freedom he needed in order to excel in the centre of the pitch and van Nistelrooy would later admit that the move, just 25 minutes in, had proven decisive: “That was it. We weren’t able to adapt and it cost us the game.”

It wasn’t, to be fair, for the want of trying. Edgar Davids and Arjen Robben were superb for the Dutch and Dick Advocaat did his share of tinkering in what turned into an intriguing game of tactical cat and mouse. The problem for the Dutch coach was that none of his changes paid off in quite the way that every one of Brueckner’s did and the decision, in particular, to replace Robben with Paul Bosvelt in the second half was, how can we put this, hotly debated in the post match press conference.

Both sides continued to create chances – there were more than 20 shots on target in a high energy, end to end game, but Nedved was the defining influence. The midfielder caused endless problems for his markers and Johnny Heitinga was eventually sent off for what was reckoned to be a second bookable on him. He had a hand too in a couple of the goals, the last of which werescored by Milan Baros and, two minutes from time, Smicer.

Baros’s was a cracker with Nedved’s cross turned quite brilliantly by Koller into the path of the striker who put it away emphatically. The chopping and changing continued from the benches and a shot from another substitute, Marek Heinz ultimately led to the winner.

“It was a fantastic game,” acknowledged Nedved afterwards, “and we deserved to win. “We slept at the start but after we awoke we showed great energy.”

Both sides seemed to have enough artistry in their ranks to go on and win the tournament and, after that game, the Czechs appeared to have the momentum required too. As it turned out though, it wasn’t artistry’s year. Step forward Greece.