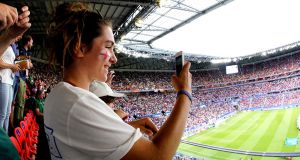 England Women have sold out Wembley for the first time for their friendly against Germany on November 9th. The attendance will smash the 45,619 record for an England Women home fixture, set at the last meeting with Germany at Wembley in 2014.

The crowd in the 90,000-capacity stadium should also top the 80,203 that watched the USA’s defeat of Japan at Wembley in the final of the 2012 Olympics. That is the record for a women’s game in England.

Sue Campbell, the Football Association’s director of women’s football, said: “This is a magnificent show of support for the squad and staff after a tremendous year of progress for the England team . . . What will make it even more special is to see everyone who has bought a ticket turn up on the day to help smash the all-time record on English soil. My message to them is to come and be a part of history.”

“I played for Chelsea first team aged 12 so I’ve been involved in the game at the top level for 25 years and I didn’t ever, ever think I’d see the day,” she said. “What an occasion. Let’s hope the performance matches the occasion and that everyone wants to come back.

“It just shows you where the game is going. If you put it on at the right time, in the right stadiums and you market it well enough, it will sell.”

With England’s record for a game outside Wembley broken by 29,238 fans watching their 2-1 defeat by Brazil at Middlesbrough’s Riverside Stadium, interest in the Lionesses is rising after their World Cup semi-final exit.

That is mirrored domestically, with more than 100,000 people attending the opening three rounds of the Women’s Super League, topping the approximately 92,000 who attended across all 110 games last season.

The record 31,213 crowd for Manchester City v Manchester United at the Etihad Stadium, 24,790 at the London Stadium and 24,564 at Stamford Bridge make up the bulk of that figure but games played in clubs’ more traditional homes are also seeing an attendance increase.