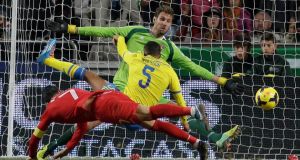 This was not quite the high-velocity collision of twin attacking greats the build-up had promised. But by the end Cristiano Ronaldo, persistent and full of close- quarter craft to the end, had made the difference, scoring the only goal on a night that never shed its first-leg nerves.

Portugal remain favourites to progress to next summer’s World Cup but this remains too tight to call between two evenly matched, and even at times rather anxiously pedestrian, European middleweights.

On a clear, still night in Lisbon the Estadio da Luz provided a suitably epic-scale stage for what has been billed as the prime tie of the European World Cup qualifiers. Of course, the main reason for this is the outsize clash of personalities, brands and outright attacking genius embodied in the two captains. True to form, the first jeers and whistles of a tense, taut night inside this cavernous steel bowl were reserved for the sight of Zlatan Ibrahimovic running out before kick-off.

Attacking totem
Sweden’s attacking totem came into this match in rare form, having scored 11 times in his last 10 matches for Sweden, reward also for an expertly enacted feat of footballing resuscitation by Erik Hamren, who not only helped lure the world’s favourite brooding Yugo-Swedish attacking phenomenon out of international retirement, but has succeeded in reconstructing this neat, fast-pressing Sweden team around him.

Portugal came into this play-off as narrow favourites. Paulo Bento has a team full of gifted technical players, albeit one that lacks a little thrust outside its one stellar talent.

Ronaldo started wide on the left of the front three, with Ibrahimovic occupying a more orthodox centre-forward’s position. Between them the twin-headed club football deity Ibronaldo have scored 39 goals in 33 club games this season and it was Ronaldo who started with greater menace here, twice almost connecting with crosses in the opening minutes. Joao Moutinho had the first real chance after five minuteshitting the side netting.

Moments later Sweden threatened, Mikael Lustig crossing for Johan Elmander to poke an ungainly shot wide of the far post. After which Sweden could draw succour from the fact Ibrahimovic at least was unlikely to be fazed by Portugal’s early command of possession. He is a player who comes to life in bursts, in those “flashbulb moments” where suddenly an opportunity presents itself, to be taken in a burst of high-speed Zlatan. It was his lovely ghosting dummy after 20 minutes that might have allowed Sebastian Larsson to open the scoring, but his shot was palmed away by Rui Patricio.

After which there was a sense of more cautious rhythms asserting themselves. Sweden, with Alexander Kacaniklic increasingly lively, will have been the happier team with the game goalless at half-time.

Sweden were still cautious after the break, continuing in a rigid 4-4-2 with Ibrahimovic roaming ahead of the dogged Elmander. Portugal, though, should have scored almost immediately, Helder Postiga and Moutinho failing to bundle the ball into the net after a melee in the Swedish goalmouth caused by a spectacular air-hack by Martin Olsson.

With the first Mexican wave of the night brewing, Portugal began to find some incision on the right as Ronaldo linked with Moutinho, a neat and purposeful presence. Sweden struggled for long periods to hold on to the ball, with Andreas Isaksson repeatedly kicking long for Ibrahimovic to battle fruitlessly with the centre-backs. It was by now all growing rather turgid.

Relentless
As it remained right up until the moment he scored the winner. It was in its way typical Ronaldo – typical of a player who is nothing if not relentless, and typical of his night which featured at least half a dozen of his dizzying leaps in the six-yard box.

Finally, in the 82nd minute, the ball was crossed with some accuracy, Miguel Veloso finding Ronaldo in front of goal ahead of his marker. His header was unanswerably powerful. He might have had another moments later, this time heading against the bar.

On a night of few chances Ronaldo’s supreme incision made the difference, but the tie remains finely balanced ahead of Tuesday’s return in Stockholm when Sweden and Ibrahimovic will surely not be so meek.
Guardian Service