Fans expected back for packed summer of sport in England

British government envisages up to 10,000 spectators back inside stadiums from May 17th 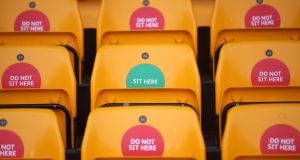 Empty seats at Wolves’ home ground Molineux: Up to 10,000 fans could be back inside grounds for the conclusion of the Premier League season. Photograph: Carl Recine/Getty Images

There is growing optimism within British government circles that large numbers of fans will be able to return for a packed summer of sport in England – including the final stages of the European Championships, Wimbledon, and the Test series against India – provided the rate of Covid-19 infections continues to fall.

On Monday afternoon the British prime minister, Boris Johnson, confirmed plans to allow up to 10,000 spectators back inside stadiums from May 17th, in time for the final weekend of the Premier League season.

However sources say the “high ambition” is to work towards full venues as the summer progresses, especially with all adults expected to be vaccinated by the end of July.

While the prospect of a 90,000 capacity crowd inside Wembley in time for the Euro 2020 final on July 12th remains unlikely – especially given most fans will be using public transport – the hope is that a series of pilots and research projects will be able to show that attending sport events is safe, especially once people have had their Covid jabs.

Britain’s culture secretary, Oliver Dowden, signalled the government’s intentions on Twitter, writing: “We aim to remove the remaining restrictions allowing full theatres, sports & business events subject to public health and outcome of reviews. Not before 21st June. If successful this will be a massive step forward!”

A series of pilots will also run in the spring and summer to see how events can take place without social distancing measures in place. The EFL confirmed that it is hoping the government will allow fans at the League Cup final between Spurs and Man City on April 25th at Wembley as part of a pilot programme.

The Football Association is also hopeful that the FA Cup final which takes place on May 15th, two days before the official return of fans, will be used as a pilot.

In a statement it said: “The FA is absolutely delighted that fans will be allowed back soon. The game is simply not the same without them and we look forward to the return of full stadiums as soon as it is safe and possible.”

Wimbledon, which begins on June 28th, also welcomed the announcement and confirmed that it was working on plans to have full crowds back if it is safe to do so.

“We remain focused on developing our plans within the scenarios of full, reduced and no public capacity so that we can remain as agile and flexible as possible to the government and public health situation,” a spokesman added.

Meanwhile, the British government has confirmed that organised outdoor sport will be allowed to return in England on March 29th, with tennis courts, football and cricket pitches and golf courses able to reopen.

The ECB said it welcomed the decision as it would permit grassroots cricket to return across England in time for the start of the 2021 season. It also indicated that it believed fans would be safe when they return in mid-May.

In a statement, the ECB added: “Our leading venues strongly believe they have the technology and know-how to return capacity crowds and we look forward to working in close partnership with the government to identify ways in which this can be achieved in a safe and controlled manner this season.”

There was also a boost for leisure centres, swimming pools and gyms with the government confirming that they would be allowed to open on April 13th, providing infection rates continued to fall.

However, organised indoor sports, such as squash and badminton, have to wait until May 1st to return.

The news was broadly welcomed by Huw Edwards, the chief executive of UK Active, who said it would provide “vital clarity for thousands of our members and a long-awaited boost for millions of their customers”. - Guardian