Wayne Rooney drops hint that he will leave United this summer

‘I’ve been at this club 13 years, but I want to play football,’ the club captain said 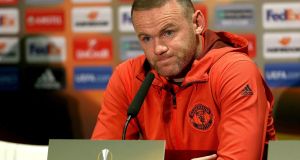 Manchester United’s Wayne Rooney speaks to media during a press conference at Old Trafford ahead of the Europa League semi-final against Celta Vigo. Photograph: Nigel Roddis/EPA

Wayne Rooney has given the clearest indication yet that his 13-year career at Manchester United will end this summer, with the striker admitting he has to leave to play more.

Rooney has lost his first-choice status this season and has also struggled to make the match-day squads selected by the manager, José Mourinho.

Asked about his future, Rooney said: “Would I like to stay? I’ve been at this club 13 years, but I want to play football. Here? Of course. I think football changes. You have different challenges in your career.

“This season I haven’t played as much as I would have liked to. I’ve tried to help the team on the pitch and off the pitch. I haven’t thrown my toys out of the pram but I’m a football player and I want to play football. The more I play, the better, and the more I feel I can help the team.

“Of course you want to play. You want to play every game. Sometimes that’s football and I’ve had to keep working and try to take my chance. That’s what I’ve done. When called upon I’ll try my best to help the team.”

Despite being dropped by Mourinho, Rooney backed him to bring sustained success to the club as they prepare to face Celta Vigo in the second leg of their Europa League semi-final at Old Trafford on Thursday night.

Rooney has won five Premier League titles, the Champions League, the FA Cup, three League Cups and the Club World Cup. Yet with his future in doubt, the 31-year-old refused to state if the Europa League was a last chance of a major honour with United.

“My focus is on trying to help us win this final and that’s my sole focus. It’s a massive opportunity for us to win a European final,” he said. “I think with Champions League semi-finals, you know you’re in touching distance of the final. This is a European semi-final, it’s the biggest chance to win a European competition in the last two or three years. The tie’s not over. It’s a dangerous position we’re in but we’ve got a good chance of going to the final if we play to our best tomorrow.

“It’s important to be back in the Champions League. This club belongs there. Realistically, it’s going to be difficult to do it through the league. We have to concentrate on winning the trophy.”

Rooney’s United career began with a hat-trick in the 6-2 victory Fenerbahce in the Champions League group game in September 2004. Asked to recall his continental competition highlights, he said: “All the big European nights here under the lights, the big win against Roma [7-1], the 3-2 against AC Milan, my debut was a big game for me. The European nights are different and you can sense the excitement around the stadium.”

Asked if Fifa’s examination of Paul Pogba’s transfer from Juventus to United will affect the midfielder, Mourinho said: “The answer is simple. No.”

Meanwhile, Mourinho had a clear message for United’s players if they fail to qualify for the Champions League: it will be a reality check and show precisely where the side’s development is at the close of the Portuguese’s first term in charge.

“If we do not go to the final, if we play in the Europa League next season, it is because we are not good enough. If we win, then it means we are strong enough to go to the final. The Champions League is the competition we want to be in. I want to focus on where we are. Nobody has more motivation than I have to try to win tomorrow.”

“It doesn’t matter what happened before, what matters is the next one. I don’t believe Celta wants it more than us.

“We have a little group with European success. Rooney and Carrick are the English boys who have been a long time in the club plus also there is Mata. No one else did it before. It will be very important for the club and the players. We will fight hard. A long journey. Match number 14 in the Europa League and we are going to fight hard.”

United lost 2-0 at Arsenal on Sunday to leave them in fifth place, four points behind Manchester City, with each having three matches left of the domestic campaign. Mourinho fielded a weakened side at the Emirates with Paul Pogba, Marcus Rashford and Jesse Lingard among those rested.

The 54-year-old denied focusing on the Europa League was a gamble. “The situation is simple,” he said. “Seventeen matches in seven weeks with 16 players is impossible. It was not a gamble. It was a simple decision, based on common sense. It’s completely impossible so since the moment we lost players and initially four of them in one week, Smalling and Jones with the international team and Rojo and Zlatan against Anderlecht, and after that we lost good alternatives, Shaw, Young, Fosu-Mensah, when we lost those it was an impossible job.