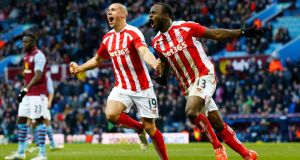 The winger was brought down by Ron Vlaar — who was sent off — to win it for the Potters at the death.

Scott Sinclair had headed Villa in front only for Mame Biram Diouf to level just before the break.

Defeat kept the hosts in the bottom three of the Barclays Premier League and underlined the job Sherwood has to keep them up.

Neither took control of the game but Villa got the early goal Sherwood craved when Sinclair, who scored his first goal since 2012 last week, opened the scoring.

Stoke wanted a foul after Sinclair and Phil Bardsley tangled from a corner but the ball fell to Fabian Delph who whipped a delightful cross in from the left for Sinclair to glance past Begovic from 12-yards.

Villa negotiated any problems without causing Stoke any of their own with Christian Benteke well marshalled by the visiting defence.

If some Villa fans expected the floodgates to open after Sinclair’s fine header they were left disappointed with the spark leaving the the hosts.

And the game was ambling towards half-time only for Stoke to level out of the blue seconds before the break.

Walters teed up former Villa misfit Ireland and his cross was powered in by Diouf from seven yards.

Combative and unflustered Stoke started to scrap Villa out of the game and, while there was little quality from either side, the visitors had the impetus.

Guzan punched away Walters’ angled volley yet there was nothing to suggest either side would grab a winner.

Villa lacked the skill or know-how to unlock Stoke again although Begovic tipped over Agbonlahor’s header with two minutes left.

But Villa imploded in injury-time when Vlaar’s poor touch allowed Moses to steal the ball and burst into the area.

Vlaar scythed the forward down, was sent off, and Moses then beat Guzan to snatch the win.

QPR captain Joey Barton added a red card and another moment of madness to his tainted CV as birthday boy Dame N’Doye delivered a dramatic 2-1 win for Hull.

Barton was dismissed for the ninth time in his career when he aimed a low blow at Tom Huddlestone as players clashed following a foul by QPR debutant Darnell Furlong.

It was a dereliction of duty from the midfielder and with his side already a goal down to Nikica Jelavic’s volley, it should have spelled the end of the strugglers’ chances.

But Charlie Austin glanced home Matt Phillips sumptuous cross in the 39th minute and that appeared to be enough for a hard-fought draw until N’Doye celebrated his 30th birthday with a close-range header in the 89th minute.

The result sees Hull record back-to-back league wins for the first time in 17 months, while QPR suffered a major setback in their own relegation battle.

The hosts quickly settled and began dictating the tempo, Ahmed Elmohamady threatening on the right and Huddlestone enjoying space at the base of the midfield.

Jelavic had a couple of half-chances as he looked for space behind the Rangers defence and broke the deadlock after 16 minutes.

Huddlestone fired a free-kick into the penalty area and when Steven Caulker’s tame header dropped for Jelavic, he buried it in the bottom corner with a clinical volley.

QPR went close to an instant reply, Barton crossing for Furlong whose looping header had Allan McGregor scrambling at the far post.

There were further chances at both ends, Jake Livermore drilling over after a neat touch from Jelavic and Phillips causing panic with a curling cross into Hull’s six-yard box.

Then came the sending-off.

Furlong was culpable for setting events in motion, leaving his foot in on Jelavic, but Barton can only blame himself for what came next.

As the players came together he pushed Alex Bruce and when Huddlestone moved towards him he lashed out inexplicably.

His dismissal almost cost QPR immediately as Jelavic nodded a fraction wide, but instead the 10 men drew level inside six minutes.

A fluid passing move ended with another superb cross from Phillips, with Austin flashing his header across McGregor and in at the far post.

The sides went in at 1-1 and manager Bruce waited just eight minutes after the restart to make an attacking change, defender Alex Bruce making way for Gaston Ramirez.

Hull were trying to build patiently, but after 66 minutes Tigers boss Bruce made a second aggressive switch — removing Livermore and bringing on Abel Hernandez.

Hull had no shortage of possession but could not seem to fashion anything to test Rob Green, surprisingly underworked in the away goal.

N’Doye thought his chance to win it had gone when his point-blank effort was beaten out by Green but the ball was still alive.

Brady returned it to the danger area and this time N’Doye made no mistake as he powered a header into the net.

England manager Roy Hodgson watched on as his former side West Brom emerged with a point in controversial circumstances at Sunderland.

Hodgson was making a rare trip to the Stadium of Light, but saw little to cheer him on a chill Wearside afternoon with the Black Cats labouring in their efforts to avoid a second successive relegation fight.

However, it might have been so different had referee Mike Jones seen two key first-half decisions the same way as the home fans among a crowd of 40,943.

Mr Jones opted not to send off last man Joleon Lescott despite awarding a foul for his early challenge on Danny Graham on the advice of assistant Constantine Hatzidakis, who then raised an offside flag to deny Adam Johnson a 45th-minute opener.

Sunderland enjoyed the better of the game, but were unable to find the back of the net — legitimately, at least — for the third game in a row, although they looked far more likely to do so than an unadventurous Baggies side, who have now lost only once in 10 outings in all competitions.