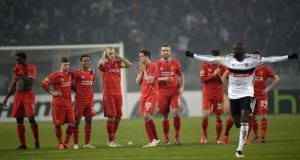 Liverpool were sent out of the Europa League after they lost 5-4 on penalties to Besiktas after drawing 1-1 on aggregate. Photograph: AFP

Lov is in the air

It was a poor night for the British contingent in the Europa League last night with three teams exiting the competition.

Liverpool were sent crashing out on penalties by Besiktas to bring their miserable European campaign to an end.

Taking a 1-0 lead into the tie, Brendan Rodger’s side were pegged back by a second half Tolgay Aslan strike, and after nine perfect spot kicks £20 million summer signing Dejan Lovren launched his effort high into the Istanbul night, sending the Ataturk Stadium beserk.

Mauricio Pochettino made seven changes ahead of Sunday’s League Cup final and his Tottenham Hotspur side were left to rue a Roberto Soldado miss as they were beaten 2-0 in Fiorentina, losing the tie 3-1 on aggregate.

Celtic are also out after they were beaten 1-0 by Inter Milan in the San Siro, their already difficult task made harder by Virgil van Dijk’s 36th minute red card.

And so it is down to Everton to fly the flag, they came from behind to ease to a 3-1 win over Young Boys at Goodison Park, winning the tie 7-2 on aggregate.

Murphy set to be only Ireland change

The biggest fixture in the Six Nations is edging closer, and Ireland coach Joe Schmidt is expected to name a largely unchanged line-up for Sunday’s game against England at the Aviva, according to Gerry Thornley.

Jordi Murphy will be the sole replacement, coming in for the injured Jamie Heaslip, while Jack McGrath is expected to retain his place with Cian Healy starting on the bench.

Ireland forwards coach Simon Easterby has refused to get into a war of word with Wales assistant coach Shaun Edwards, who has been vocal in his criticism of Ireland’s regular and increasing use of the choke tackle, writes Gavin Cummiskey.

Tonight Ireland women welcome world champions England to Ashbourne for what will be the final game at the ground, and Niamh Briggs side will be looking for revenge for last year’s harrowing 40-7 defeat.

The Under 20s are also in action at Donnybrook tonight and, like the senior side, are looking for a third win from three to keep the Grand Slam dream alive.

Rory McIlroy made his seasonal bow on the US Tour at the Honda Classic but the world’s best golfer was outdone by Padraig Harrington in the opening round at Palm Beach.

Three-time major winner Harrington made four birdies and dropped just one shot so sit three under par and tied for third on day one, two off the clubhouse lead of Jim Herman.

Rory meanwhile stuck his first tee shot into a bush and made two double bogeys, but back-to-back birdies in 17 and 18 dragged him back to three over.

Followers of Gaelic Games in the UK have mixed views on the Sky Sports deal, and Sean Moran spoke to three English county secretaries over the television rights issue, which is set to be discussed tonight at the opening of the GAA’s annual congress.

Kerry welcome Dublin on Sunday and Kieran Donaghy is set to captain his county in his first appearance of the campaign after his involvement in Austin Stacks’ All-Ireland Club Championship run.

Jockey Mark Walsh will miss the Cheltenham festival after he broke his arm partnering Winter Breeze at Thurles, leaving him facing six weeks out of action.