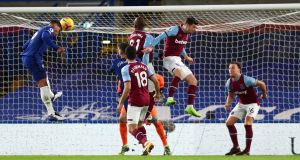 The wait for a convincing display from Chelsea goes on. Their first win over a fellow top-half side this season owed more to grit than inspiration, even though two late goals from Tammy Abraham gave the final score a deceptive look, masking the fact that West Ham had forced the game to be played on their terms for long spells.

In the end resilience was enough to move Chelsea into fifth place but not to eradicate the doubts over their form, particularly in attack. With Thiago Silva imperious at the back, Frank Lampard’s side dealt with some uncomfortable moments. They battled for a clean sheet and produced quality when it mattered, leaving West Ham to regret some powderpuff finishing and a slow start.

It was Silva who set the tone for Chelsea early on, snapping away at Sébastien Haller’s heels whenever the ball came to the West Ham forward. Sharp in the challenge, the centre back’s aggression summed up Chelsea’s positive mindset, allowing them to push high and squeeze the play.

Haller looked slightly surprised to find a top Premier League defender giving him no time to settle. On the touchline David Moyes was bellowing at the Frenchman, urging him to produce more. The centre back Angelo Ogbonna seemed to be guiding Haller through the game, telling him when to run and where to move.

It did not feel like an ideal way to build and, with West Ham struggling to hold possession, Chelsea’s greater intensity paid off when Silva broke the deadlock after 10 minutes, capitalising on poor marking to meet Mason Mount’s corner with a powerful header.

Silva celebrated with a guttural roar before being mobbed by his team-mates. Under pressure after insipid defeats away to Everton and Wolves, Chelsea greeted the breakthrough with relish. For a while the blue shirts swarmed all over West Ham, attacking at speed, their passing crisp and urgent. Christian Pulisic threatened with lively dribbles and a second goal might have arrived when Mount broke through on the right, only for the midfielder’s low centre to flash across the face of goal.

“Come on, we need some bucking up here,” Declan Rice yelled, no doubt seething at being given the runaround against his first club. The West Ham midfielder, who remains a target for Chelsea, was not enjoying his evening.

Always vocal, Rice knew that his team-mates were off the pace. That has not been the way for West Ham this season. Awkward and physical, they had ways of hurting Chelsea. They even thought that they had an early lead when Rice scored from a tight angle after being released by a quick free-kick. An offside flag cut the celebrations short.

West Ham were capable of inconveniencing Chelsea. Keen to adopt a robust approach, Moyes had dropped the skilful but unreliable Saïd Benrahma and added steel by starting Mark Noble for the first time since September 12th.

Yet Chelsea remained dangerous on the break. After 43 minutes they countered brilliantly, Pulisic a blur of motion as he ran at the West Ham back four. But when Pulisic released Timo Werner, the German’s lack of confidence betrayed him. Without a goal since the start of November, Werner shot straight at Lukasz Fabianski.

Werner looked to the heavens, wondering when his luck would turn. He has missed a lot of chances recently and spent much of the opening hour failing to combine with Tammy Abraham, recalled for Olivier Giroud. One cross, sliced high into the Matthew Harding Stand on the run, summed it up.

Fortunately for Chelsea, West Ham’s forward was not exactly oozing menace either. Early in the second half a Cresswell cross was begging to be headed home. Haller, rising high, glanced well wide.

Yet West Ham kept pressing, making themselves a nuisance, winning a series of corners. Tomas Soucek was winning headers in midfield and Bowen kept looking for openings on the right. Forced back, with Jorginho unable to dictate the flow after starting in place of Kai Havertz in midfield, Chelsea needed to resist and head the high balls away.

Yet without the injured Michail Antonio up front, West Ham lacked decisive quality. Eventually the gulf in class told. Werner was rewarded for refusing to let his head drop, helping to seal the points when his cross-shot found Abraham, who slid the ball past Fabianski.

Moments later Abraham finished again from close range, carrying Chelsea to safety. Lampard, however, will not be fooled. – Guardian