Forward ends summer of speculation by commiting future to the champions 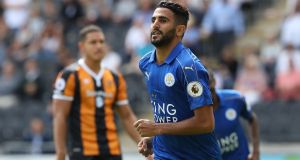 Riyad Mahrez has given Leicester City a major boost by signing a four-year contract, putting an end to any speculation that he could leave the Premier League champions this summer. The PFA player of the year has followed in the footsteps of Jamie Vardy by agreeing a long-term deal that ties him to the club until 2020 and includes a significant pay rise.

In a welcome development for Leicester before their home game against Arsenal on Saturday, it has also emerged that there is no release clause in Mahrez’s new contract, which will make him the club’s second-highest paid player, behind Vardy, who earns around £100,000 a week.

The club and Mahrez’s representatives have held discussions for a while, with Claudio Ranieri also holding several conversations with the player and urging him to stay. The Leicester manager has a close relationship with Mahrez and was always confident the 25-year-old would remain.

Mahrez was a revelation last season, scoring 17 Premier League goals and assisting another 11 in Leicester’s title success. His stock has risen dramatically as a result and he was linked with Arsenal and Barcelona this summer, yet neither club made a serious move for him.

This week Mahrez admitted that only “two or three clubs in the world” could tempt him away from Leicester and suggested that he had no desire to leave the Premier League. With Leicester also able to offer him Champions League football – the draw for the group stage will be made next week – and the Midlands club willing to double his wages, everything was in place for the Algeria international to stay.

Having lost N’Golo Kante to Chelsea last month, Leicester were determined to hold on to Mahrez and keep together the core of the team who won the Premier League. As well as Mahrez and Vardy, Wes Morgan, Kasper Schmeichel and Andy King have signed deals this summer. Danny Drinkwater is the one remaining key player whose long-term future has yet to be resolved.

Mahrez was signed from Le Havre, in the French second division, in January 2014 during Nigel Pearson’s reign as manager. He started to blossom towards the end of the 2014-15 season, when Leicester won seven of their last nine matches to survive, and then took his game to another level during the title-winning campaign.

He started this season with a goal, scoring from the penalty spot to equalise against Hull City last Saturday, but it was not enough to prevent Leicester from slipping to a surprise 2-1 defeat. With Arsenal also losing on the opening weekend, the game at the King Power Stadium on Saturday carries added significance for both clubs.