Proposed league will be rejected by fans – Claudio Ranieri 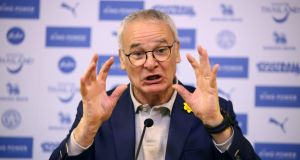 Leicester City manager Claudio Ranieri has said the mooted European Super League would be against the spirit of sport and represent a case of big-name clubs punishing smaller ones for their own failings.

Executives from Arsenal, Chelsea, Manchester United, Manchester City and Liverpool held talks in London this week with Charlie Stillitano, the chairman of Relevant Sports, an American firm interested in exploring the idea of setting up a Europe-wide league reserved for the continent’s richest clubs.

Ranieri said that while a breakaway league might be in the financial interests of the big clubs, sports lovers would reject it.

“People must think what the fans want, not only about money,” added the Italian. “Because culture and the fans are more important than other things.”

Ranieri suggested that the nature of sport demands that rather than plot a breakaway when faced with stronger competition, traditional powers should reflect on how to rise to the new challenges.

“That’s sport,” he said. “I understand they want to do something but if something strange happens, don’t blame the little teams. They have to blame themselves. Maybe they have a good idea. But they should ask ‘why is a little team like Leicester doing better than us?’”

“There will be a big battle in every match now,” Ranieri said. “Not only for us but for all the Premier League. Now nobody can enjoy, everybody must win, so there is a change in the philosophy now.”

The Leicester manager insisted he does not care about the result in Saturday’s north-London derby, when the two teams directly below Leicester go head to head.

“I try to put my philosophy into the minds of the players,” he said. “It is not to see the others. It’s not important, it doesn’t matter. What is important is what we are doing. We have to think about what we can do. In the end if somebody is above us, ‘well done’.” Guardian Service