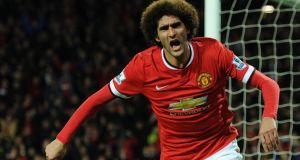 Manchester United are beginning to resemble the juggernaut of old. This was a fourth consecutive league win under Louis van Gaal as the side continues to settle as the manager predicted would occur after becoming familiar with his methods.

These remain early days, but before Monday’s visit to Southampton there can only be optimism regarding the consistent form United are showing.

The team news consisted of Wayne Rooney being unfit due a problem suffered in Saturday’s 3-0 win over Hull City. This meant James Wilson was named ahead of Radamel Falcao – the latter was on the bench – for only a second Premier League start of his career. The only other change from the weekend’s victorious XI was Ander Herrera for Ángel di María, who suffered a hamstring injury against Hull.

Michael Carrick’s return to regular football – this was a fifth appearance in a month following injury – has been a prime factor in the uplift in form of the side. In what was a quiet opening to the game it was the midfielder who created a first moment of quality. The sweeping ball he found Marouane Fellaini with dropped on his chest, but after the Belgian played in Herrera, the Spaniard’s subsequent pass infield failed to find a team-mate.

United should have taken the lead when an Asmir Begovic mistake handed possession to Robin van Persie inside the Stoke penalty area. Yet with Wilson open and instantly findable the striker chose to delay and instead pass to Herrera, who skied over from close in.

Herrera was about to make amends in impressive style. The No21 lined up in the middle of United’s advanced midfield trident yet was using much of the turf. When Juan Mata moved along the left it was Herrera who provide the overlap to run onto the ball and swing in a perfect left-foot cross that had Fellaini rising to head past Begovic for the United first.

Stoke had barely threatened in the first half hour. However, Erik Pieters showed his ambition by advancing into space down the left and firing in a ball that the striker Bojan Krkic was unlucky not to connect with and Marcos Rojo scrambled away for a corner.

Ultimately nothing derived from this though Fellaini miskicked a first attempted clearance before he volleyed of the ball away to safety.

This all served as warning to United to retain the 90-minute-long focus Van Gaal hailed following the Hull outing. There was a sense was that only they could undo themselves.

So it was for the Stoke equaliser as disaster struck five minutes before the interval. When Herrera passed to Fellaini the midfielder suddenly went down holding his neck. From the ensuing move the ball ricocheted off Chris Smalling, following a Krkic run, and into Steven Nzonzi’s path. He emphatically beat David de Gea and that was one apiece.

Right before this the home support had been singing their favourite carol. This is the one that goes to the tune of Twelve Days of Christmas and that starts with “Five Cantonas”. When the referee, Jon Moss, blew for half-time this festive cheer had dissipated somewhat.

Fellaini had walked off having missed a chance to register his and the team’s second while holding the troublesome neck. However he was fit to resume after the break and was soon linking up with Herrera and Antonio Valencia on United’s right.

As on Saturday, Herrera was involved in much of his team’s forward play. The next time came when he appeared down Valencia’s right flank and with a smart soft shoe-shuffle won a free-kick with which Mata should have done better than hit straight at Begovic.

United were pouring forward now. Fellaini, Van Persie, Herrera, and Wilson were all involved as the 20-times champions threatened to retake the lead only to be repelled by stiff Stoke resistance.

This was about to crumple. From the right Mata again curved in a high ball and this time, with Rojo in attendance, a host of Stoke players including Ryan Shawcross merely watched as it bounced past Begovic and into the net to give United the advantage again.

Before this encounter Van Gaal had said: “The aim is to make Old Trafford the fortress it has been in past seasons. Stoke are a very difficult team to play against and we know they are capable of getting results away from home against top teams ad they have done against both Manchester City and Tottenham Hotspur.

“Our job is to focus on getting the three points we need to maintain momentum and send us to St Mary’s not only in a confident mood but ready for the busy December period.”

Spirits were certainly high at the close, with Wilson providing one exhilarating moment. Receiving the ball near halfway, a burst of pace took him through and though the shot was wide, an impressive marker had been laid by the youngster. After Mame Diouf twice had efforts cleared off the United line, including a memorable save from De Gea, the same could be said of United.

Former Barcelona president Bartomeu arrested after club offices raided 13:01
Echoes of Berlin 1936 . . . Should Beijing Winter Olympics be boycotted? 10:01
The Offload: Ireland women must be allowed to move with the times 10:00
Tiger Woods touched by red and black tribute by fellow players 08:52
England prop receives death threats for not clapping Wales off the pitch 08:29