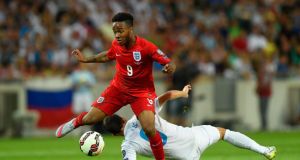 Manchester City have made an improved offer of €55 million for Liverpool’s Raheem Sterling. Photograph: Getty

Manchester City have made an improved £40million (€55m) offer for Raheem Sterling, but Liverpool are expected to reject the latest bid.

Having had an offer of £25million (€35m) plus £5million (€7m)worth of add-ons turned down last week, City have upped what they are willing to pay by #10million.

However, that still falls short of the £50million minimum Liverpool believe the 20-year-old England international is worth and they are likely to turn down the offer.

Last week’s initial bid was immediately rejected out of hand by the Merseysiders and while this one has not been given the same treatment the outcome is likely to be the same.

Liverpool have always maintained they do not want to sell Sterling, who has two years remaining on his contract, but there is no doubt the situation has deteriorated since the youngster turned down a new £100,000 (€140,000)-a-week deal in January.

Agent Aidy Ward’s subsequent claim his client would not even sign for “£900,000(€1.26m)-a-week” prompted Liverpool to cancel a scheduled meeting to reopen talks in May

But last month manager Brendan Rodgers said he expected Sterling to remain at the club and, at that point, they were still planning talks before the end of the season to try to extend his stay — even after Ward’s comments threw a spanner in the works.

“Raheem has two years left and I expect him to see that two years through and continue to behave as immaculately as he has done,” said the Reds boss at the time.

Sterling has maintained throughout negotiations that his issue is not about money, stating in an April interview not sanctioned by the club, that he did not want to be viewed as a “money-grabbing 20-year-old”.

Liverpool’s sixth-place finish means they cannot offer him Champions League football next season and a disjointed campaign on the pitch personally has not helped.

The forward enjoyed his best form as a left-sided attacker alongside Luis Suarez and Daniel Sturridge the season before last in the Merseysiders’ title near-miss but in the last 12 months he has found himself shunted between right wing-back, right wing, a number 10 and a central striker.