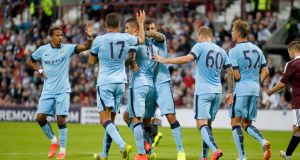 Manchester City players: The team walked off the pitch in Croatia after claims of racist abuse against Seko Fofana. Photograph: Richard Sellers/Getty Images)

The Croatian Football Federation has confirmed it will be looking into claims that Manchester City’s Seko Fofana was racially abused during an elite development squad match against HNK Rijeka on Tuesday.

City’s coach Patrick Vieira took his players off the pitch as Fofana alleged that he had been targeted by Rijeka players after being sent off in the friendly and it is not yet clear what action the Barclays Premier League champions will take next.

In a statement issued to Press Association Sport, the CFF revealed it is investigating the matter, despite Ranko Buketa, who was in charge of the Rijeka team on Tuesday, wholly denying the claims made by the City teenager.

“Croatian Football Federation is in a process of gathering information regarding the alleged incident and if there are any decisions to be made we’ll make it public on our website,” the statement read.

“CFF follows a strong ”no racism“ policy so we take all accusations of racism very seriously. Fight against racism (and any sort of discrimination) is one of the key components of our president Davor Suker’s programme and that is why we will have a good look into this matter.”

Buketa alleged that Vieira had an ulterior motive for taking his side off following Fofana’s red card on the stroke of half-time but, with CFF confirming its own investigation, UEFA may now also take a look at the incident — the latest in a number of racial discrimination cases involving Manchester City.

CSKA Moscow were ordered to close part of their stadium after midfielder Yaya Toure was racially abused during a Champions League match in October. Porto were fined £16,700 in April 2012 after their supporters directed racist chants at Toure and striker Mario Balotelli, who has since left the club, during a Europa League tie. Youth team striker Devante Cole was racially abused by players and supporters during a UEFA Youth League match against Atletico Madrid in February.