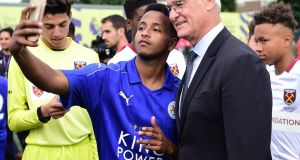 The Leicester City manager Claudio Ranieri has signed a new four-year contract to keep him at the club until June 2020.

And in another boost for the Premier League champions, Riyad Mahrez has accepted he will not be allowed to leave this month after talks between his representatives and the club’s director of football.

Ranieri (64) replaced Nigel Pearson last summer and led the midlands club to the first top-flight title in their history.

The Italian follows key players such as Jamie Vardy, Wes Morgan and Kasper Schmeichel in committing his future to Leicester.

“The energy that exists at this club – from the owners and the staff, to the players and supporters – is something very special. I am very happy and proud that I will be part of it for years to come,” said Ranieri.

Last season’s PFA Player of the Year Mahrez expressed his desire to move last month after turning down a new contract worth around £80,000 (€93,000) a week. Yet Leicester’s owners, having sold N’Golo Kante to Chelsea, were adamant Mahrez would not be allowed to depart.

The director of football, Jon Rudkin, met the Algerian international’s agent to underline that point, with Leicester not willing to entertain any bids for Mahrez so close to the start of the season with little time left to find a replacement.

Negotiations over a new contract will continue, however, with any agreement potentially resting on whether the 25-year-old would be allowed to leave if a suitable bid is received in future

The champions have also made a €27 million offer for the Santos forward Gabriel Barbosa. The 19-year-old, also known as Gabigol, is playing for Brazil at the Rio Olympics and his future is likely to be decided after the Games.

The player has a contract at Santos until 2019. It was recently announced that he had signed a new deal until 2021 but that is not the case, the player and his family wanting to see which clubs are interested in signing him.