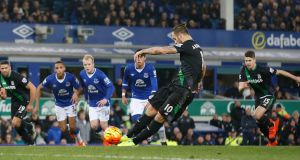 A breathless game finished with Stoke City revelling in another eye-catching win and Everton lost for words at their latest implosion. Roberto Martínez’s team twice came from behind to lead 3-2 with 10 minutes remaining only for more defensive errors, this time from Tim Howard and John Stones, to conjure defeat from the jaws of victory. One day the penny might drop for Martínez that points are not awarded for style alone.

Marko Arnautovic’s 90th minute penalty proved the winner on an enthralling, rollercoaster afternoon at Goodison Park, while Xherdan Shaqiri, who rejected a loan move to Everton in the summer, graced the contest with one of the goals of the season. Romelu Lukaku instigated a spirited comeback with his 17th and 18th goals of the campaign but once again Everton’s defensive vulnerability undermined their striker’s remarkable output and talk of entering the Champions League race.

Stoke set the benchmark high and early when Shaqiri scored his first goal for Mark Hughes’s team following a flowing move involving Bojan Krkic and Arnautovic. The former Barcelona forward collected Geoff Cameron’s pass and spun easily away from Stones before slipping the ball inside to Arnautovic, who did likewise as Ramiro Funes Mori came across to cover. Shaqiri read the move perfectly and arrived in front of Brendan Galloway to convert from close range.

As in their previous home game against Leicester, Everton equalised swiftly through the formidable Lukaku. The Belgium forward started the move that produced his 17th goal of the campaign by releasing Ross Barkley into space on the left and continuing his run into the area. Barkley squared to James McCarthy, he sent a disguised pass into Lukaku and, with Erik Pieters playing him onside, the 22-year-old had time and space to beat Jack Butland convincingly. The assist proved to be McCarthy’s last contribution, however, as his immediate recall from a hip injury backfired and he had to be replaced by Tom Cleverley. He would also make way after creating Everton’s second equaliser.

The leveller brought Goodison Park to life and sparked a dominant spell from Everton. Galloway went close following a good run and backheel from Barkley and Séamus Coleman appealed in vain for a penalty after a slight touch from Pieters. Stoke supporters berated the Irish defender for a dive – they were wrong – but Gerard Deulofeu deserved their condemnation with an embarrassing flop over the outstretched leg of Ryan Shawcross. The Spanish winger was rightly booked.

A flowing, end-to-end game reflected the array of attacking quality on display from both sides and Stoke regained the lead on the stroke of half-time courtesy of a glorious goal from Shaqiri. Bojan carved open the Everton defence with a sweeping cross that dropped behind Galloway at left-back. The ball was still running away from Shaqiri when he flicked a first-time, nonchalant finish over the head of Howard and inside the far post from the corner of the area. Goodison, the away section included, fell silent for several seconds in shock and awe at the magnificent touch.

Everton’s reaction also merited high praise. Lukaku levelled for the second time and in fine fashion when he controlled Cleverley’s cross-field pass on his chest and maintained his balance long enough inside the area to finish under the Stoke keeper. The 18-goal striker then released Barkley in behind Shawcross and Deulofeu was perfectly placed to convert the midfielder’s cross as it flashed across Butland’s goal.

There appeared little prospect of the goals ceasing there – and so it proved, with Stoke scoring their third with 10 minutes remaining. Howard had spared Steven Naismith with a vital challenge on Arnautovic from the substitute’s weak backpass but his weakness at dealing with crosses into his six-yard box would cost Everton yet again. The USA international met Arnautovic’s delivery with a feeble punch that fell to Joselu and the Stoke substitute produced an emphatic finish from the angle.

Everton’s implosion was not yet complete. In the final minute Stones went to ground too easily and sent Arnaotovic sprawling. The referee, Mark Clattenburg, deliberated long and hard before rejecting Stones’ claims of a feint touch on the ball and pointing to the spot. Arnautovic made no mistake from 12 yards.