Ken Early: you can watch nothing and yet miss nothing 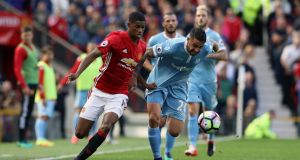 Last July Donald Trump accused Hillary Clinton of trying to rig the US election by persuading the organisers of the presidential debates to schedule them against America’s unstoppable TV ratings juggernaut the National Football League.

“As usual, Hillary & the Dems are trying to rig the debates so 2 are up against major NFL games. Same as last time w/ Bernie. Unacceptable!” Trump tweeted.

In the event, the first debate crushed the NFL in the ratings. Some 84 million people watched Clinton v Trump, which is five times the average audience for an NFL game.

Such is the morbid fascination of the 2016 election that the NFL has seized on it as an explanation for why their ratings this season have seen a sudden, sharp decline.

The numbers watching NFL games have slumped 11 per cent year-on-year. It’s a worrying trend for the TV companies who pay the NFL a collective $7 billion a season for the rights to show the games.

At least the NFL has Trump to point the finger at. There’s no such luck for Sky Sports, whose TV ratings for live Premier League games have seen a 19 per cent fall year-on-year.

The UK also had a high-profile political race in August and September but the Corbyn-Smith tussle for the Labour leadership didn’t have quite the diabolical allure of the US election. Instead, reasons for the ratings decline suggested to Charles Sale of the Daily Mail included illegal streaming, the Olympics and the “hot summer”.

The idea that illegal streaming could be affecting ratings is more persuasive. We’ve had years of wage stagnation since the financial crash yet it is more expensive than ever to watch football on TV, and subscription prices continue to rise. When this is taking place in a technological landscape in which people can easily watch illegal streams in HD for nothing, it’s not surprising many choose not to pay.

In the US pay-TV is in decline. ESPN’s subscriber base peaked at just over 100 million homes in 2011. They have since lost more than 10 million subscribers. Moreover, the pace of decline has been accelerating, with four million of those subscriber losses happening since July 2015.

There are two big reasons for this. First, in a world of YouTube, Netflix etc, many people are deciding that pay-TV no longer offers value for money, and they’re ending their subscriptions. Second, young people don’t watch traditional TV. Nielsen figures show that those in the 18-24 year old age group are spending 38 per cent less time watching TV than they did in 2010.

The only glitch in this theory as it applies to the Premier League is that, unlike the declining US networks, Sky’s overall subscriber base is still increasing, albeit slowly.

Sky don’t release the figures for how many of their customers subscribe to the sports packages, but based on what is in the public domain we can say that the decline in ratings for Premier League football is not being driven by a decline in overall pay-TV subscriptions.

And it’s hard to get your head around the idea that ratings for live football are declining when coverage of the game and all that surrounds it is more ubiquitous than ever.

We have to confront the possibility that people like everything about football except watching it.

It is, after all, a pretty antiquated form of entertainment. As the options for entertainment proliferate and grow more addictive and interactive, football on TV offers the same formula: they play, you watch.

It has become possible to watch nothing, and yet miss nothing. Any noteworthy detail of the day’s football – Wes Hoolahan scores a beautiful goal, David Luiz tries a bicycle kick and lands on his face – is detected by the global hive mind and presented in neatly edited clips, freeing people up from the onerous task of looking out for those details themselves.

Afterwards you can look at statistical analyses which will tell you what really happened in the game.

“My generation is the last generation with video,” he told the recent Soccerex conference.

“Everyone younger knows iPads, virtual reality, FIFA. We have to accept they don’t watch TV the way we did. I watched a game for 90 minutes; there’s not a single player who does that anymore. We have to adapt.”

“There’s not a single player” who watches a game for 90 minutes anymore? Maybe Sky should be relieved the ratings are only down by 19 per cent.

Tonight is Red Monday, which is how Sky have chosen to hype up Liverpool v Manchester United. The ratings will likely say it was the most-watched match of the season so far.

But even the people who tuned in probably weren’t paying much attention.