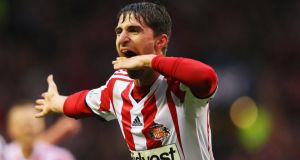 Miracles tend to be painfully elusive but Sunderland supporters now know they really can happen. Only three weeks ago Gus Poyet conceded that divine intervention was called for if his side were to be saved from relegation.

But a run of four straight wins has transformed the Wearside landscape, securing one of the greatest escapes in Premier League history.

With West Bromwich Albion possessing a significantly superior goal difference to Norwich City, the rubber-stamping of Sunderland’s once apparently impossible survival means that the team from Carrow Road are destined to join Fulham and Cardiff City in the Championship.

The goals were scored by the excellent Jack Colback and Fabio Borini but, not for the first time, Lee Cattermole held Poyet’s side together and the enforcer departed to a standing ovation in the 87th minute.

Soon afterwards a near capacity crowd at one of English football’s biggest stadiums unleashed a roar which must have been held 12 miles up the road in Newcastle.

An amalgam of thanks, joy and, above all, sheer relief, it sealed a triumph Poyet conceded would represent the greatest achievement of his life.

Within minutes he rose from the bench to his feet and pumped thin air with his fists. Marcos Alsono overlapped from left-back and having dodged Steven Reid, crossed in Jack Colback’s direction.

Out of contract next month, Colback has remained one of Sunderland’s most committed and influential players, thriving in a more attacking midfield role under Poyet. Here he arrived in the area just in time to expertly half volley Alsono’s cross beyond Ben Foster.

Pepe Mel’s visiting side were already up against it.

Their task toughened once Sebastian Larsson, cleverly exploiting a chink of space, lifted a cute chipped pass into Borini’s path and the Liverpool loanee volleying past Foster.

It was an exquisite move and a superb finish which probably left West Brom counting down the minutes until they could board the plane back to Birmingham.

Mel’s team perked up appreciably but cheered on by a crowd in excess of 45,000, Sunderland remained on course to record a fourth straight Premier League win for the first time since December 2000. Substitute Jozy Altidore missed a chance to add to the home side’s tallybut shot wide Colback’s inviting cross.