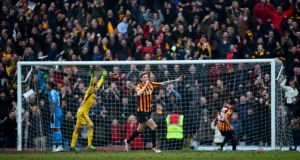 Bradford reacted to their television snub by adding another Premier League scalp to reach the FA Cup quarter-finals for the first time since 1976.

It did not need the credence of live transmission to emphasise that the League One club are the story of this year’s competition and they comfortably sent Sunderland the same way as Chelsea courtesy of a goal in each half.

Bradford manager Phil Parkinson made one change from the team that pulled off one of the FA Cup’s greatest heists in the previous round at Stamford Bridge, and so positive has been their journey that there was a sense of inevitability that the man drafted in would have a significant impact.

And as early as the third minute Billy Clarke, a replacement for Andy Halliday but positioned in behind the strikers rather than on the left flank, had already dragged one effort wide, when he helped the League One club into the lead.

Jon Stead was adjudged to have been floored by Wes Brown on Bradford’s right flank and when Filipe Morais, one of the scorers against Chelsea, whipped the free-kick across the six-yard box Clarke seized on Sunderland’s failure to clear effectively by aiming a left-footed bobbler goalwards, the deflection off John O’Shea re-directing its path to beat Vito Mannone.

It was the highlight of a first-half unspoilt by a pitch that cut up badly but rarely stymied attacking endeavour – Billy Jones’ attempted 20th-minute cross propelled into orbit via a combination of a bobble and shinpad the exception.

Bradford carved out the better initial openings and Stead’s glancing header from a James Meredith centre teased its way across the six-yard area on its journey for a goal-kick. Clarke then displayed commendable close control just after the half-hour to dribble through the heart of the visitors before unleashing a drive that Mannone beat away.

Sunderland felt aggrieved at not having the opportunity to level from 12 yards after Steven Fletcher was accosted by a Rory McArdle challenge in the process of shooting but otherwise their threat was limited to a couple of efforts straight at Bradford goalkeeper Ben Williams: a Danny Graham header that lacked power and a shot from Patrick van Aanholt that took a deflection.

Trailing at the break and without the rested Jermain Defoe as an option from the bench, Sunderland threw on Connor Wickham for the second period. However, it was one of their former strikers rather than one of their present that struck next and most gallingly for their 4,253 travelling supporters one who managed only two goals in 18 months with them.

Johnson’s botched clearance was exposed when James Hanson nodded it back into the Sunderland penalty area and Stead steadied himself before shooting under Mannone’s body to provide a two-goal advantage.