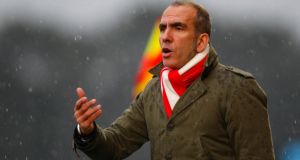 Paolo Di Canio has been appointed Sunderland head coach on a two-and-a-half-year deal. The Italian takes charge today after agreeing a contract with the North East club last night.

The 44-year-old replaces Martin O'Neill who was sacked following Saturday's 1-0 defeat at home to Manchester United, which left the club a single point above the relegation zone.

Di Canio, who has not managed at Premier League level before, has courted controversy most recently following his acrimonious departure from League One club Swindon in February. Despite that Sunderland chairman Ellis Short believes the former West Ham forward is the man to steer the Black Cats away from the relegation zone.

"Paolo is hugely enthused by the challenge that lies ahead of him. He is passionate, driven and raring to get started," he said in a statement on the club's official website. "The sole focus of everyone for the next seven games will be to ensure we gain enough points to maintain our top-flight status.

"I think that the chances of that are greatly increased with Paolo joining us.

"Our fans have shown tremendous patience and understanding this season. They have continued to back the team in huge numbers, both home and away, and that is something that continues to inspire all of us in our drive to give them the successful club they deserve.

"That remains our primary aim."

Di Canio's only managerial experience came during a tumultuous 18-month stint at Swindon, which was highlighted by helping the club to promotion back to League One last season.

The Italian also grabbed the headlines for occasional outbursts against some of his players, but despite those moments the club had continued to prosper under his leadership this season.

The Robins were challenging for back-to-back promotions before his sudden departure in February.

Di Canio cited "broken promises" from the Swindon board as the reason for his decision adding also that he had "delivered everything and more that was asked of me".

His first game in charge of Sunderland will come against Chelsea at Stamford Bridge next Sunday, followed by a Tyne-Wear derby against fierce rivals Newcastle at St James Park a week later.

The Italian has seven games to save Sunderland from the drop but inherits a team that is without a league win in eight games, taking three points in that time.

Di Canio will be Sunderland's fifth manager in a little more than four years, and the first Short has chosen since Niall Quinn's departure as chairman.

After leaving Swindon he outlined his belief that he was now ready to manage at a higher level, telling BBC Sport: "I believe I am at a stage now where I am a Premier League or Championship manager. I have already proven my ability in League Two and League One, where there are many arrogant and average players, and I was able to turn their mentality and help them become better footballers.

"You can imagine if I had the chance to do the same at the top level. I proved in League One and Two that I was the best manager, and I now feel ready for the next level."

Di Canio faces the task of galvanising a dispirited squad for a task in which they cannot afford to fail, with the financial implications of the new broadcasting deal meaning relegation is simply not an option.

Sunderland have at times been abject during their recent miserable run and their lack of goals - they have scored just seven and conceded 12 in the past eight games - has been brought into sharper focus by the loss of leading scoring Steven Fletcher through injury for the remainder of the campaign.