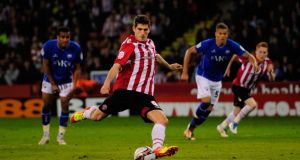 Chesterfield have announced the signing of Ched Evans, three months before the 27-year-old faces retrial for the rape charge he had quashed in April.

Evans said he is “very excited and privileged to be resuming my career at Chesterfield” and according to reports will earn less than £2,000 a week when he officially joins on July 1st, some way off the £20,000 salary per week he earned at Sheffield United where he worked under the current Spireites manager, Danny Wilson.

The Wales international was convicted of rape in 2011, however that conviction was quashed in April. He now faces retrial on October 4th having pleaded not guilty at Cardiff Crown Court last month.

“I hope to make a valuable contribution both on and off the pitch for the football club, the fans and the community,” Evans told the Chesterfield website.

The Chesterfield chairman, Dave Allen, added: “We are delighted to have secured the services of an outstanding footballer, who is now keen to get back to work and score goals.

“Danny Wilson knows Ched very well, having previously managed him at Sheffield United. Chris Morgan, our first team coach, also speaks highly of him from their time together at Bramall Lane. Chesterfield Football Club have given a great deal of thought to this signing and following the court’s decision, we are in no doubt that Ched Evans should be welcomed back into his profession as a professional footballer.”

Chesterfield had been linked with Evans last year but said at the time they would not sign him. Oldham were close to offering Evans, who has not played competitively since 2012, a route back into football in January 2015 but performed a U turn after pressure from outside the club.