Chelsea ease past Everton for breathing space in fourth 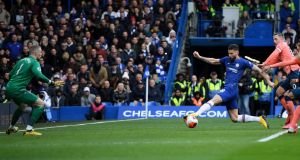 Chelsea took a grip on fourth place thanks to their biggest home win of the season, crushing Everton with a brilliant attacking display. Goals from Mason Mount, Olivier Giroud, Pedro Rodríguez and Willian were enough for them to move five points clear of fifth-placed Wolves and ensure that Carlo Ancelotti endured an unhappy return to Stamford Bridge.

This was comfortably Everton’s worst display since his appointment in December. They defended woefully and barely created anything on a ground where they have not won in 25 visits. Their hopes of a late push for European football are all but over.

Ancelotti, who won the double with Chelsea in 2010, struggled to hide his anger as his former side took control from the start. Everton were ponderous on the ball, slow to press and vulnerable whenever Chelsea, who were full of confidence after Tuesday’s victory over Liverpool in the FA Cup, entered the final third.

Ancelotti was right to be worried. There was no sign of any urgency from his players, no sign of any energy or conviction and no reaction once it became clear that a large part of Chelsea’s plan was based around isolating Djibril Sidibé, who endured a nightmare during the opening period.

Frank Lampard’s approach against his old boss worked to devastating effect, though the frustration for Ancelotti was that he had spotted the danger developing as Mount, Pedro and Marcos Alonso worked to outnumber Sidibé during the early stages. At one point the Italian could be seen with his arms outstretched in his technical area, berating his players as a crossfield pass found Pedro in acres of space on the left wing, but the hole was too big to repair.

Chelsea were working the angles and buzzing around Sidibé, who was receiving little protection from his team-mates, and it came as no surprise when they went ahead in the 14th minute, Pedro’s pass presenting Mount to spin brilliantly before flashing a low drive inside Jordon Pickford for his first goal since December.

As half-time approached Sidibé let a simple pass run under his feet and out for a throw, summing up how much Chelsea had messed with his head. In the Frenchman’s defence, though, Everton’s problems only started with him. Tom Davies was nowhere near Mount when the Chelsea youngster drove home the first goal, Bernard seemed to think that tracking back to help Sidibé was beneath him and Giroud delighted in roughing up Michael Keane and Mason Holgate, Everton’s hapless centre-backs.

Chelsea were too slick in every area of the pitch. The absence of N’Golo Kanté, Mateo Kovacic and Jorginho in midfield made no difference; Davies and André Gomes chased shadows throughout.

Gilmour impressed on his first league start, Mount roamed intelligently and Ross Barkley had another good game, silencing the taunts from the away end when he created Pedro’s goal with a fine assist.

The only question was whether Chelsea, who have struggled to take their chances at home this season, were capable of making their superiority count. Chances came and went. Willian cantered down the right and a drew a good save out of Pickford.

But Everton were all over the place at the back and Chelsea doubled their lead with a lovely goal. Gilmour started the move with a pass that allowed Giroud to combine with Barkley, who pierced a creaky offside trap with a ball through to Pedro. The Spaniard made no mistake, slotting home his first league goal since February 2019.

This was by far Pedro’s best display under Lampard. The former Barcelona winger looks certain to leave when his contract runs out in the summer but he was full of running here. Willian, another veteran looking for a new deal, extended the lead at the start of the second half, fizzing a low drive beyond Pickford from long range.

The fourth goal soon arrived, Willian playing a one-two with Gilmour before crossing for Giroud to finish from close range. The marking was non-existent once again.

Everton, whose best chance came when Dominic Calvert-Lewin dinked wide at 2-0, had no response.