Séamus Coleman on target for Everton, wins for Fulham, Southampton and West Ham 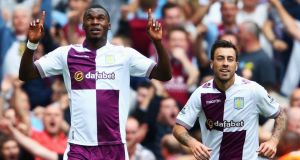 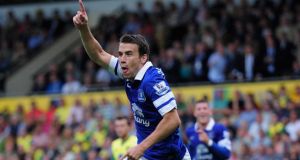 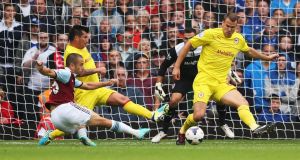 Arsenal fans couldn’t have imagined a worse start to the league than what transpired at the Emirates Stadium this afternoon, where they were beaten 3-1 by Aston Villa and saw Laurent Koscielny sent off.

The chants of “spend some f**king money” after the final whistle said it all, the home fans clearly frustrated by a summer that has seen just one addition, a free transfer, to the squad, despite there being cash reserves in place.

It all began so well for the Gunners, when they took the lead through Olivier Giroud after just six minutes. but Christian Benteke levelled in the 22nd minute to make it 1-1.

The prolific Belgian saw his spot-kick saved after Wojciech Szczesny fouled Gabriel Agbonlahor, but he headed in the rebound.

And 16 minutes after half-time Benteke had another chance from the spot after Koscielny fouled Agbonlahor; this time he only needed one chance. It got even worse for Arsenal six minutes later when Koscielny was shown a second yellow card, and Villa made sure five minutes from time as Antonio Luna scored on his debut.

New Everton boss Roberto Martinez had to settle for a point from his first competitive game in charge as the Toffees drew 2-2 with Norwich at Carrow Road.

After a goalless first half, Steven Whittaker put Norwich in front in the 51st minute but teenager Ross Barkley drilled in his first goal for Everton 10 minutes later and in the 65th minute the visitors took the lead through Seamus Coleman.

Their lead lasted only six minutes, as Ricky van Wolfswinkel grabbed a debut goal for Norwich.

There was no dream start to life in the Premier League for Cardiff, who were beaten 2-0 at West Ham. Joe Cole netted on the turn in the 13th minute and Kevin Nolan made the points safe for the Hammers 14 minutes from time.

England hero Rickie Lambert’s great week continued as he netted a 90th-minute penalty to give Southampton a 1-0 victory over West Brom at The Hawthorns.

It was the same score at the Stadium of Light where Patjim Kasami’s first goal for Fulham earned the Cottagers victory over Sunderland.

Liverpool were the first winners of the new season as they saw off Stoke 1-0 in the early game at Anfield.

Daniel Sturridge scored the only goal in the 37th minute with a precision shot from the edge of the area.

Stoke goalkeeper Asmir Begovic was the man of the match as he kept Liverpool at bay with a host of fine saves, and it looked like Potters boss Mark Hughes would get a point in his first competitive game when the visitors were awarded a late penalty for a handball by Daniel Agger.

There was only a minute of normal time left when Jonathan Walters stepped up but debutant goalkeeper Simon Mignolet became an instant hero as he denied the Irishman and then Kenwyne Jones from the rebound.

1 Felix Jones expects De Allende and Snyman to boost Munster
2 Gerry Thornley: Saracens very late to apologise for repeated cheating
3 The Offload: Saracens eye chance to extend tainted record
4 Donegal’s Yvonne Bonner very much up for Down Under
5 Welcome to the Greenlandic championship: Soccer at the edge of the world
Real news has value SUBSCRIBE