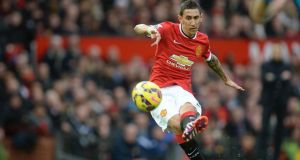 Angel di Maria will have a medical with Paris St Germain over the next 24 hours after Manchester United agreed to sell the midfielder to the French club for €63 million. Photo: Martin Rickett/PA

Angel di Maria has arrived in Doha for his medical with Paris St Germain.

The Argentina international touched down in Qatar late on Sunday night and posed for photos with excited fans at the airport in the country’s capital.

Di Maria is expected to undergo tests at the Aspire Academy on Monday.

If there are no hiccups, Di Maria could complete his transfer from Manchester United to PSG before the end of the day.

The 27-year-old was given permission to fly to Qatar for talks with PSG officials after United agreed a €63 million fee with the French champions for the midfielder.

United signed Di Maria from Real Madrid for €84.8 million last summer, but after an encouraging start his form dipped drastically and he only started one of the final 10 games of last season.

The former Benfica winger was left unsettled after an attempted burglary on his Cheshire home in February.

Since then, the 27-year-old and his family have been living in a city-centre apartment in Manchester owned by former United defender Phil Neville.

Di Maria said as recently as June that he wanted to stay at United, but it became apparent that he had his heart set on a move to the French capital in the last couple of weeks.

The Argentinian was due to report for duty during the second leg of United’s pre-season tour of the United States on July 25th, but failed to show.

After United’s 2-0 defeat to PSG in Chicago on Thursday, Laurent Blanc said both clubs were close to striking a deal for the player.

”Manchester United and PSG are two big clubs and negotiations can be difficult but we are close to the end,” the PSG coach said.

United manager Louis van Gaal claimed at the time that he had no idea where his star midfielder was.

”I don’t know where he is,” the United boss said.

”You can ask that every week but I don’t answer that question.”

Van Gaal is expected to move quickly to sign a replacement for Di Maria. The Dutchman is interested in Barcelona forward Pedro, who was frustrated by his lack of game time at the Nou Camp last season.

1 Six Nations: Ireland are contenders but England still the team to beat
2 In Donegal Michael Murphy is seen, simply, as a godsend
3 Owen Doyle: Creeping professionalism of schools rugby a threat to the game
4 Allianz Football League weekend previews
5 Here is your handy guide to sport on television this week
Real news has value SUBSCRIBE