All of this weekend’s Premier League team news 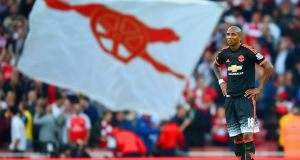 Ashley Young is out of Manchester United’s clash with Everton after picking up an injury against Arsenal two weeks ago. Photo: Michael Regan/Getty Images

Striker Diego Costa is available for Chelsea after serving a three-match ban for violent conduct, but right-back Branislav Ivanovic suffered a hamstring injury on duty with Serbia and faces around three weeks out — joining goalkeeper Thibaut Courtois (knee) in the treatment room. Cesar Azpilicueta, Ramires, Kurt Zouma and 19-year-old Ola Aina are options for right-back, while midfielder Ruben Loftus-Cheek could also start.

Aston Villa forward Gabby Agbonlahor continues to be sidelined with a calf injury which has kept him out since last month, but winger Adama Traore (ankle) is available after three weeks in the treatment room. Midfielder Jack Grealish has regained match fitness during the international break, but defenders Jores Okore (knee) and Ciaran Clark (thigh) remain on the sidelines.

West Ham can welcome back Andy Carroll, Enner Valencia and Angelo Ogbonna. Carroll has recovered from the knock which kept him out of the draw at Sunderland a fortnight ago, fellow forward Valencia is over the knee injury he suffered on Europa League duty in July — although he is short of match fitness — and centre-half Ogbonna is fit after a hamstring problem. Defenders Winston Reid and Aaron Cresswell hope to shake off minor niggles, but midfielder Alex Song (ankle) is three weeks away from returning.

Key defensive duo John Stones and Seamus Coleman are set to make their Everton returns. Stones missed two club games as well as England’s recent internationals because of a knee problem, while Coleman played for the Republic of Ireland on Sunday following a hamstring complaint. Midfielders Tom Cleverley (leg) and Steven Pienaar (hamstring) are also in contention, and Kevin Mirallas has completed a three-match ban following his red card against Swansea last month.

Manchester United captain Wayne Rooney is fit to feature after an ankle injury, but winger Ashley Young is out with a calf problem. Michael Carrick is in contention after recovering from a groin problem and fellow midfielder Bastian Schweinsteiger is available even though he suffered an injury in the warm-up for Germany’s match against the Republic of Ireland. Ander Herrera and Marcos Rojo stayed behind at Carrington during the recent international break and they are ready to feature, but defender Paddy McNair is sidelined for a month due to liver damage.

Manchester City have lost a trio of key players. Striker Sergio Aguero (hamstring) faces at least a month out while left-back Aleksandar Kolarov (leg) and playmaker David Silva (ankle) will be sidelined for a fortnight after a costly international break. Captain Vincent Kompany (calf) is available again but the club’s other left-back Gael Clichy (ankle) and midfielder Fabian Delph (hamstring) are still out.

Following surgery on an ankle injury, captain Tommy Elphick became Bournemouth’s latest absentee and will remain unavailable for at least the coming eight weeks. Defender Tyrone Mings, forward Callum Wilson and winger Max Gradel are also all injured, and likely for the entire season. And, while midfielder Harry Arter is nearing a first-team return, Saturday is expected to come too soon for him.

Southampton will be without Shane Long after the forward injured ankle ligaments while on international duty with the Republic of Ireland. Midfielder Jordy Clasie, however, seems in line for his Premier League debut, having been sidelined since suffering a hamstring injury in July’s Europa League victory over Vitesse Arnhem, although manager Ronald Koeman may not risk him from the start. Koeman’s only other absentees are long-term injury victims — goalkeeper Fraser Forster and defender Florin Gardos.

Nathan Dyer could return for Leicester after recovering from a knee injury. The on-loan Swansea winger has not played since suffering the injury while scoring the winner in the 3-2 victory against Aston Villa last month, but is now fit again. Boss Claudio Ranieri will assess Riyad Mahrez and Jeff Schlupp after their return from international duty with Algeria and Ghana respectively, but they are expected to feature. Ranieri has no other injury worries after the international break.

Watford winger Ikechi Anya (calf), midfielder Valon Behrami (calf) and defender Allan Nyom (knee) are all in line to feature after not playing during the international break. Hornets boss Quique Sanchez Flores added that playmaker Jurado, who missed the 1-1 draw against Bournemouth, will return to training in 10 days, but defensive duo Joel Ekstrand (knee) and Tommie Hoban (knee) remain sidelined with long-term injuries.

Arsenal will check on the fitness of forward Alexis Sanchez (hip) following his return from Chile duty. Centre-half Laurent Koscielny is close to a return from a hamstring problem and faces a fitness test, while midfielder Mathieu Flamini (hamstring) and captain Mikel Arteta (dead leg) are both expected to be available. Midfielder Jack Wilshere (fibula), forward Danny Welbeck and Czech midfielder Tomas Rosicky (both knee) continue their rehabilitation.

Jonny Evans, James Morrison, Saido Berahino and Salomon Rondon are all doubts for West Brom, with the quartet each rated a 50-50 chance to be fit. Evans is still struggling with the groin strain he suffered against Crystal Palace prior to the international break while Morrison has an ankle injury and Berahino has picked up a knock in training. Rondon did not arrive back in England until late this week after featuring in Venezuela’s two World Cup qualifying games.

Sunderland boss Sam Allardyce will be without winger Jeremain Lens and defender Sebastian Coates for his first game in charge. The pair both serve one-match bans. However, Allardyce is likely to have defenders Younes Kaboul (knee) and Adam Matthews (ankle), and midfielders Yann M’Vila (hamstring) and Ola Toivonen (groin) available.

Defenders Daryl Janmaat, Massadio Haidara (both knee) and Paul Dummett (hamstring), as well as midfielder Jack Colback (hamstring), have returned to training and are in contention as Newcastle attempt to secure their first league win of the season at the ninth attempt. However, goalkeeper Tim Krul (cruciate ligament) is out for the season and is joined on the sidelines by fellow goalkeeper Karl Darlow (ankle), defenders Steven Taylor and Kevin Mbabu (both hamstring), midfielders Rolando Aarons (calf) and Gabriel Obertan (hamstring), and striker Emmanuel Riviere (knee).

Norwich expect to have playmaker Wes Hoolahan available after he picked up a heel problem while on Republic of Ireland duty. Striker Gary Hooper has stepped up his rehabilitation from an ankle injury, but is unlikely to feature this weekend. Midfielder Youssouf Mulumbu has also returned to training this week after a fractured metatarsal, but will not be rushed back into action.

Andre Ayew is set to overcome a knee problem and feature for Swansea. The forward took a bang to the knee in the Swans’ last game — against Tottenham two weeks ago — and withdrew from the Ghana squad for their friendly against Canada. Midfielder Jonjo Shelvey is also expected to play after carrying a knee injury and right-back Kyle Naughton is available again after missing the 2-2 draw with Spurs to attend the birth of his daughter.

Stoke striker Mame Diouf will not be involved, having been granted compassionate leave following the death of his mother. Defender Marc Wilson is fit to make his comeback after missing two games with a calf problem and winger Xherdan Shaqiri should also be available having overcome his thigh complaint, but goalkeeper Shay Given (knee) is set to miss out. Club captain Ryan Shawcross continues to make good progress after back surgery, but is still around two weeks away from a first-team return.