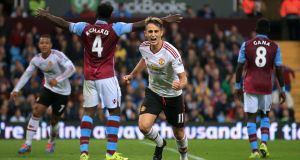 Adnan Januzaj has signed for Borussia Dortmund on loan from Manchester United for the rest of the season. Photograph: Nick Potts/PA

Manchester United’s winger Adnan Januzaj has joined Borussia Dortmund on loan for the rest of the season.

The 20-year-old Belgium international has struggled to fit into the team under manager Louis van Gaal, though he did score the winner against Aston Villa earlier this season, and will move to the Bundesliga club.

Januzaj tweeted a picture of himself holding a Dortmund shirt and said: “Pleased to sign for Dortmund ?? ! Looking forward to new season”.

Dortmund announced that Januzaj will wear the number nine shirt for the club.

Januzaj told the club’s website: “Borussia Dortmund are a big club and the fans are meant to be really incredible here. I would like to achieve great things with this team.”

Dortmund’s director of sport Michael Zorc added: “Adnan is a highly talented and technically adept player who rounds off our attack.”

Two weeks ago, Van Gaal reacted angrily to suggestions that he did not give Januzaj enough of a chance to make an impact last season, but added that the winger needed to find consistency.

Van Gaal said then: “Adnan had eight starts last season and 14 substitutions so he didn’t have any chances? This is not true, in my opinion.

“The other players have no right? (to a place in the team) Only Adnan has a right? He has to compete with 23 or 24 other players.

“He is 20 years old. The characteristics of a young player is he is not consistent. He has to show that. Maybe he can show it this season. It is possible.”