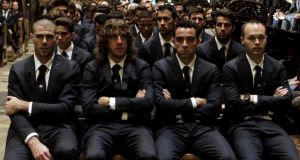 Barcelona bade an emotional farewell to Tito Vilanova at the funeral of their former coach on Monday night.

The entire first-team squad attended the service at Barcelona Cathedral to pay their respects to Vilanova, who died on Friday of throat cancer at the age of 45.

His wife and two children were also in attendance, with son Adria, a player in the Barca academy, and daughter Carlota, giving a moving and tearful address.

The ceremony was conducted by the Archbishop of Barcelona, Lluis Martinez Sistach.

A host of former presidents, including Joan Laporta and Sandro Rosell were at the cathedral, along with board members, led by current president Josep Maria Bartomeu.

“Today we say goodbye to a very loved person,” Bartomeu said. “I promise you, he will always have a place in our hearts and we will never forget him.”

Jordi Roura, Vilanova’s assistant during his single season in charge at the Nou Camp, who led the team mid-campaign when the boss was undergoing treatment for his illness in the United States, said: “Football was always your passion and it accompanied you until the end.”

Representatives from other clubs in La Liga and across Europe were also president, including Manchester City’s director of football Txiki Begiristain, who worked in the same role at Barcelona from 2003 to 2010.

Earlier, Barca’s players dedicated Sunday night’s 3-2 comeback victory at Villarreal to Vilanova. It was their first match since his death.

“This was one of the most difficult days to play,” midfielder Xavi said on www.fcbarcelona.com. “We felt it in our bodies. We’ve lost a leader. He will always be an example. We relied on our pride and grit to win this game. We dedicate it to Tito.”

The night began with a moment of remembrance with Vilanova’s image shown on the big screens in tribute to the man who guided the Catalan club to the title in the 2012/2013 season before being forced to resign last summer.

Midfielder Andres Iniesta said: “The death of Tito has really affected us. We knew him for a very long time. With him we won the league with a haul of 100 points, but what we’ll remember about him is what he gave us on a personal level.”

Uefa have confirmed there will be a minute’s silence before the Champions League semi-finals on Tuesday and Wednesday night.

1 Ken Early: Why international football is fading into obscurity
2 Royal Portrush: Golf clubs ‘in real distress’ as eyes turn to 2021
3 Colin Kaepernick’s exile is too fresh for NFL to speak out on US protests
4 Rugby Australia slashes one-third of staff in restructure
5 Louise Galvin’s rugby career on hold for work on the frontline
Real news has value SUBSCRIBE
Crossword Get access to over 6,000 interactive crosswords