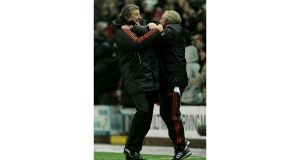 Kevin Davies was left unmarked at the back post to head the visitors into the lead just before half-time, after the homeside controlled much of the opening period.

Matt Taylor had earlier cleared a shot from Maxi Rodriguez off the line and Lucas Leiva pushed the ball wide when left unmarked from a Dirk Kuyt cross in first-half stoppage time.

Liverpool drew level when half-time substitute Steven Gerrard, on for the injured Raul Meireles, chipped the ball into the path of Torres, who fired in the equaliser.

The homeside piled on the pressure and Cole netted the winner when Gerrard’s deep cross fell to him off a defender in added time.

Ivan Klasnic threatened to spoil the celebrations when he pulled a late save out of Pepe Reina on the turn, but the homeside deservedly took the points.

Hodgson insisted afterwards he will not be distracted by speculation about his future and said the owners - John Henry and chairman Tom Werner - wished him well prior to the game.

“I spoke to the owners and they wished me good luck and sympathised with the frustration I must have been feeling after Wednesday night (the defeat to Wolves),” he said. Asked if he had hteir support, he added: “I guess so. It is not about me. I am very pleased and honoured to have this job.

“It is about Liverpool Football Club and performances so I don’t take the speculation seriously of course.

“I take enough negativity from you guys (the media), today I am going to be quite blunt and I am not interested in anything negative. Had we won on Wednesday night you would now be asking me about the Champions League but because we didn’t win on Wednesday I am asked about the negativity which, to be honest, is being created here in this room.

Hodgson denied there were problems behind the scenes, adding: “I know when players are behind the club and their manager and when they are not and anyone who seriously suggests, after watching us for six months, that there is a problem on this front that is being dishonest.”

Wayne Rooney and Javier Hernandez scored to keep Manchester Unitedat the top of the Barclays Premier League on goal difference with a 2-1 win at West Brom.

Rooney opened the scoring when he headed in Patrice Evra’s cross on three minutes but James Morrison equalised with a long-range shot.

United survived when referee Chris Foy turned down a penalty claim after Gary Neville sent Graham Dorrans flying when the midfielder was clean through.

Peter Odemwingie later fired a penalty wide after Rio Ferdinand had fouled Jerome Thomas but Hernandez wrapped up the win with 15 minutes to go.

Manchester City, who started the day level on points with their city rivals, won 1-0 at home to Blackpool.

Adam Johnson shot home from long distance after the visitors had only cleared the ball to the edge of their area.

City should have gone further ahead when Luke Varney fouled Yaya Toure but Carlos Tevez put the penalty wide.

Arsenalkept up the pressure on the leading duo by moving to within two points with a 3-0 win at Birminghamwho had dropped into the bottom three following West Ham’s win.

Samir Nasri netted a second after the break and Arsenal completed the scoring when Roger Johnson netted an own goal.

West Hammoved out of the bottom three with a 2-0 home win over fellow relegation candidates Wolves.

The Hammers went ahead through a Ronald Zubar own goal after 51 minutes. Carlton Cole failed to get a touch on a cross from Frederic Piquionne and the ball hit Zubar and went in.

Freddie Sears netted the second when he shot home after Tal Ben Haim had slid the ball to him with 10 minutes to go.

Welbeck opened the scoring when his shot from the edge of the area was deflected past goalkeeper Mark Bunn by Ryan Nelsen and Bent made it 2-0 when he headed in a cross from Ahmed Elmohamady.

Gyan wrapped up the win just before the end.

Stokewon 2-0 at home to Everton, Kenwyne Jones rising to head in a cross from Matthew Etherington to give them the lead.

Phil Jagielka extended Stoke’s lead when he flicked the loose ball in after the visitors had failed to clear when Jones headed on a long free-kick.

Tottenhambeat Fulham1-0 as Gareth Bale headed the only goal.

A free-kick from Rafael van der Vaart was headed past Mark Schwarzer by Bale who had been stood in the defensive wall.

2 Grand National hero Rachael Blackmore on the mark at Fairyhouse