‘We have to try to minimise that as much as possible and suffer as little as we can. But we will suffer’ 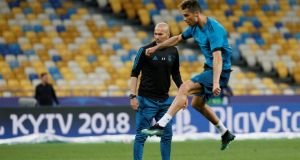 As his Real Madrid side arrived in Kiev to face Liverpool in the Champions League final, Zinedine Zidane admitted that he is ready for chaos and insisted that if there was pressure, they would be all the better for it.

“Today and tomorrow will never happen again; we will live other experiences, but never this, so we have to make the most of it,” the Frenchman said. “And if there’s a bit of pressure, no problem. It’s life, it’s better like that – a bit of emotion. We’re humans and humans are pure emotion. With pressure it’s even nicer.”

Jürgen Klopp had said that Madrid can live with chaos. That perhaps sets them apart from previous opponents Liverpool have faced and he also talked about how this was a meeting of two coaches accused of not being strong tactically. For Zidane, it is a recurring theme, and when he was asked if he felt valued as a manager, he replied: “Yes”, before pausing, smiling, and adding: “Well, sometimes not – but that’s life.”

He added: “We have had chaos before and we will have tomorrow, for sure. Football is simple: there are two teams and you have to know how you can damage them and control how much they damage you. We have to try to minimise that [chaos] as much as possible and suffer as little as we can. But we will suffer.”

Zidane claimed that in a final there is no favourite, describing the game as “50-50”, and dismissed suggestions that his team could be undone by over-confidence, amid a sense in Spain that anything other than a Madrid victory would be a major shock. “Don’t worry,” he said. “In the dressingroom we don’t think that. People can say what they like but we know that’s not the way it is. We’re not favourites – and nor are they.”

His captain, Sergio Ramos, suggested that Klopp’s claim that Madrid were like a “Swiss watch” was an attempt to distract them. “They’re like a Swiss watch too,” he said. “We have to be focused on not conceding and reducing the danger of their world-class players.”

A few weeks ago, Zidane had said that Cristiano Ronaldo, injured at the time, would be at 150 per cent for this final. Asked if he was there yet, the Madrid manager said: “He looks good to me – and if it’s 140 per cent, no problem.”

Ramos said that Madrid’s players were in great shape. “Everyone is ready, there are no injuries, we’ve been training incredibly well and we have extraordinary motivation, we’re all like miuras [fighting bulls],” he said. - Guardian service