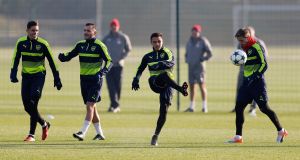 Arsène Wenger believes Arsenal’s hopes of securing Alexis Sanchez to a new long-term contract will depend more upon convincing the forward of the ambition of the club than the financial package on the table.

The manager is considering starting Sanchez, who has scored five goals in his past two appearances for the club, in Tuesday’s final group game against Basel despite the striker’s onerous recent workload, and Arsenal being braced to finish as runners-up in the section to Paris Saint-Germain.

They must better the French side’s result to finish top and will seek to establish an advantage early before Wenger reassesses his approach at half-time once news filters through from Parc des Princes, where PSG will expect to defeat Ludogorets Razgrad.

Sanchez’s deal expires in the summer of 2018, with negotiations ongoing with his representative, Fernando Felicevich, over an extension. The Chilean, a £30 million signing from Barcelona in 2014, earns a weekly salary of around £130,000 ,and would expect that to rise to more than £200,000 if he commits to new terms.

However, Wenger is unconvinced that money will be the 27-year-old’s principal motivation when it comes to deciding whether his stay is extended.

“Well, I would like to say the luxury of the modern game should be it’s not only about the money, because the players make anyway wherever they play good money at this level.

“You know, nowadays, you negotiate with the agents more than with the player. We are in negotiations, yes. The players [Sanchez and Mesut Özil] are 18 months away from the end of their contracts, so it’s normal to be talking. But the players always come in at the end, when it’s a renewal, because with the first contract you need the players present. But after that, when you renew, 90 per cent of the contracts are negotiated with the agents.”

Sanchez has enjoyed a prolonged spell as Arsenal’s main striker this season, scoring 13 times in 19 appearances, but could start in a wider position behind Olivier Giroud at StJakob Park.

Wenger has brought a strong squad to Switzerland, with Giroud – recovered from a slight groin strain – replacing his suspended compatriot, Francis Coquelin, in the travelling party.

Özil, who is close to signing a contract extension, may retain his place as the central playmaker, although his involvement could also be curtailed early if the game in Paris is veering away from Ludogorets at the interval.

The temptation is there to rest either Sanchez or Özil, so integral to this side’s prospects, from the start before the visit of Stoke City in the Premier League on Saturday.

“I will make a decision on Tuesday as to who will start but, overall, the best way when a guy is in good success and confidence [is to continue picking him],” Wenger said. “It’s more dangerous to stop him than keep him going. It is always difficult to work out what is physical and what is mental [in terms of fatigue], and predicting who is tired and who is not can be hard. So I have kept them all together as a group. We have a squad that is united.

“But I haven’t decided yet, honestly. I have a few more hours, but my main priority will be to win the game. Overall, it’s [about] stability. But we have to do our job, and continue to win the games we play.

“You never know what might be happening in Paris. We’ll see: PSG are favourites to beat Ludogorets at home and win the group, but we can assess that scoreline at half-time and see where we go.”

Wenger, who watched Hector Bellerin train on his own back at London Colney after a hamstring problem, knows a tricky tie awaits in the last 16 whether Group A is won or not, but finishing second could prompt a collision with Napoli, Barcelona, Atletico Madrid, Monaco, Borussia Dortmund or Juventus, all of whom currently top their respective sections.

Real Madrid and Bayern Munich are the most daunting second-placed teams at present.

Wenger will offer Granit Xhaka a start against his former club, with the Switzerland international having graduated through Basel’s youth ranks before joining Borussia Munchengladbach in 2012.

“I was born and raised here, and played in the youth team before going on to win the Swiss championship with the club,” the Arsenal midfielder said. “Being back home is great. But I hope I can take positive feelings back to England tomorrow.” Guardian service