Totti leaves Manchester City with ground to make up 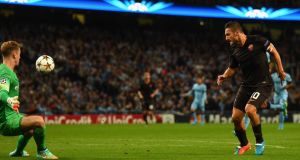 Francesco Totti of AS Roma scores the equaliser against Manchester City. The 38-year-old became the oldest scorer in Champions League history at the Etihad. Photograph: Laurence Griffiths/Getty Images

It has become the recurring theme of Manchester City’s difficult and largely unsatisfactory Champions League story, and the longer it goes on the harder the impression becomes of a team struggling to know what needs to be done to put it right. This is the fourth successive season they have failed to win their first home game in the competition and, while the damage is not yet grievous, there is already strong evidence that they might have to re-invent themselves if their latest European campaign is not going on to become another chastening experience.

A club with their ambitions must be alarmed about their lack of progress at this level and it could conceivably have been worse bearing in mind the long passages when Roma, sensing the home side’s vulnerabilities, threatened to pin them back. Both sides could reflect on opportunities to win the match, with Manuel Pellegrini’s team showing some late momentum, but the lingering impression of City was one of deja vu for anyone who has followed their difficulties in Europe since the Abu Dhabi money poured in.

Collectively, they are still getting to grips with this competition but, individually, the paradox is that this is a team with bags of experience at the highest level. On that basis, it does not quite add up how they can look so raw at times. They had an early breakthrough here courtesy of Sergio Agüero’s fourth-minute penalty but it did not take Roma long to shake their heads clear and they fully deserved Francesco Totti’s equaliser midway through the first half.

In doing so, Totti took over from Ryan Giggs as the oldest player, at 38 years and three days, to score in the Champions League. He might not be the lean figure of old, packing a few extra pounds these days, but his sureness of touch and understanding of space is still there. He was a joy to watch at times and it was a beautifully measured chip, with the outside of his right foot, to lift the ball almost nonchalantly over the advancing Joe Hart.

Alongside him, Gervinho was operating with the pace and directness that was seen only fleetingly during his days at Arsenal. Radja Nainggolan, the Belgian, played with finesse and intelligence, as witnessed by the pass that left Totti running clear for his goal. Roma had arrived here after winning every one of their five Serie A games and they quickly recovered from the setback of Agüero’s early goal to start passing the ball with enough confidence to trouble their opponents.

All the same, analysis of City’s performance should also take in that this was a Roma team lacking their usual goalkeeper and both their first-choice centre-halves, and not forgetting the considerable influence of Daniele De Rossi and Kevin Strootman in midfield. Their understudies all acquitted themselves ably but it was reasonable to have expected City to take control once Maicon had jutted out his left arm to bring down Agüero for his penalty.

Maicon has had too distinguished a career to be held up for the ridicule that has come his way since one harrowing ordeal against Gareth Bale four years ago and the Brazilian’s overlapping runs caused his former club plenty of problems. Yet he is not remembered with great fondness at City after his contribution to Roberto Mancini’s final season and it was the kind of defending that would not normally be expected of a player with his experience.

Agüero was not in a scoring position when Maicon’s hand went up to block the Argentinian and it was a moment of impetuousness from the Roma right-back. It was a clear penalty and City were also entitled to think they should have had another one before half-time when Jesús Navas’s cross came back off the hand of Kostas Manolas.

The home side were, however, finding it difficult to contain their opponents and, by half-time, Roma could also reflect on a shot that Maicon had arrowed against the crossbar and a number of counterattacking breaks when Gervinho’s speed and elusiveness had offered hope.

Pellegrini’s withdrawal of Navas at half-time indicated the City manager felt his team were too open. James Milner’s introduction did bring an upgrade but the home team’s problems were more widespread than one switch. Their tempo was poor and it was unusual to see their more attacking players, chief among them Yaya Toure, struggling for maximum form.

They are odd moments indeed when a routine ball gets played into Agüero’s feet and comes back awkwardly off his shins and there was plenty to encourage Roma in the early part of the second half when a growing sense of foreboding was engulfing the stadium. City have previously tried to manufacture an atmosphere on these occasions, dimming the lights before kick-off and projecting a giant blue moon across one of the stands. The routine has been dropped and the noise these days is strangely subdued bearing in mind this is the competition the club want to revere.

Hart had been culpable of a small yet decisive slip as he came off his goalline to try to intercept Totti’s goal but the City goalkeeper did well otherwise. Frank Lampard was next to come on and tested Lukasz Skorupski with a dipping 25-yard drive at his near post. Yet Roma had their own chances and the home crowd were sounding agitated before the end.