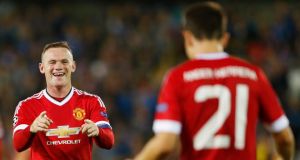 This was an evening of optimum satisfaction for Manchester United. Wayne Rooney ended a 10-game barren streak in club colours by scoring a hat-trick and Louis van Gaal’s men strolled into Thursday’s draw for the Champions League group stages.

It finished 7-1 on aggregate, United claiming this second leg 4-0. The manager’s stated intent to utilise Marouane Fellaini as a striker was not sighted at the Jan Breydel Stadium, and there was a dismal late penalty miss from Javier Hernández. Yet by the close there were glimpses of some of the stylish play that has been lacking previously against a side that finished second in Belgium last year.

United began as if they required the 3-1 advantage from last week’s first leg at Old Trafford. There was a disjointedness all too familiar about this Van Gaal team early on. Balls were controlled errantly, possession ceded, passes hit straight out. The chief culprit was Ander Herrera, under-cooked and given a first start of the season who was reaching for form.

Before the quarter hour was up the Spaniard was booked for a clumsy challenge that placed United under pressure. The free-kick was around 20 yards out and delivered by Victor Vázquez, the home captain. Brugge’s playmaker should have done better with an effort that came to nothing but Herrera and United were warned.

Rooney had entered the match in a desperate search for a first goal in over 850 minutes. United’s No10 had been criticised for his tentative showings in the opening four matches, so when he scored after 20 minutes the striker found the best kind of answer. Memphis Depay starred in the first leg and was again the man who tore Michel Preud’homme’s side apart. Taking the ball, he cut in from the left where the 21-year-old appears so comfortable before sliding in a smart pass to Rooney. The United captain did not break stride or thought as he fashioned a dink over the on-rushing Sinan Bolat.

It meant Brugge had to score three unanswered goals to force extra-time. They continued to offer a threat. Boli Bolingoli-Mbombo’s pace and ability to slip beyond the United defence proved occasionally troublesome. Vázquez made one pass that allowed the striker to create havoc, Bolingoli-Mbombo turning Matteo Darmian in the area too easily.

Depay registered twice in last week’s first leg and afterwards he rued not ending with a hat-trick. This game had passed the half hour before the Dutchman could race clear at Bolat’s goal. Depay took his time, his run turned into a dawdle and when he finally took aim the shot was blocked.

United’s only concession so far this season had come in the first leg, but as half-time approached Daley Blind nearly headed beyond Sergio Romero. The subsequent corner was taken by Vázquez and Davy De Fauw’s glance across the visitors’ goal created a moment of panic. Moments later Bolingoli-Mbombo should have finished but he allowed Romero to smother the ball.

Herrera had been one of two changes from the side that drew with Newcastle United on Saturday. He came in for Morgan Schneiderlin, while Michael Carrickreplaced Bastian Schweinsteiger. As Van Gaal’s “second captain”, Carrick is an established lieutenant of the manager.

Herrera enjoys no such billing. He has begun this season like last: trying to fight his way in to the starting XI. Prior to kick-off Van Gaal again sounded a distant note when speaking of the Spaniard’s inclusion.

“He has showed a few times he came in and did good,” the 64-year-old said. “Also in the training sessions he did good. I have to give rest to the players who have always played. Schneiderlin has played 90 minutes always and Schweinsteiger, I have to build him up so that’s why Carrick is playing now.” By the break Herrera had began to convince, one run back allowing him to make a vital clearing header.

Given his need for some serious game-time the 26-year-old will have been relieved when Adnan Januzaj was asked to make way for Schweinsteiger at the break. The German made an immediate impact. Herrera pushed up into Januzaj’s No10 position but it was Schweinsteiger who turned playmaker rolling the ball along an inside right channel to Rooney. The chance fizzled out but Herrera provided his captain’s second. Depay, again, played a pivotal role. His pass expertly found Herrera along the right and the square ball to Rooney was slotted instantly beyond Bolat.

Now Herrera was part of a front United four who could attack at will. His sweeping pass to Juan Mata split the Brugge defence open and when the latter drove the ball into Depay it came only a fraction over-hit.

This became a welcome goal glut for the Van Gaal project. Rooney completed his eighth United hat-trick from Mata’s pass. He could have had a fourth within seconds but the radar was awry.

This hardly mattered as Herrera completed the rout with a fine goal, before Hernández, who replaced the Spaniard immediately after scoring, sending a penalty wide having slipped during his run-up.