Manchester United fight back to leave Russia with a point

A second half Anthony Martial goal leveled the scores 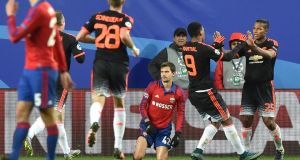 This was a struggle yet Manchester United found a way to grab a point through Anthony Martial who continued his stellar start at the club with a second-half diving header.

Before and after the Frenchman’s 65th-minute strike, which was his fifth for United, Louis van Gaal’s team were largely disjointed. They will enjoy better days than these under the manager but when the contest ended on a cold Moscow evening Group B showed them in second place behind Wolfsburg on four points, and with qualification still firmly in their hands.

Less than a quarter of an hour had been played when United suffered the poorest possible start. Martial, who was operating on the left, handled the ball as Mário Fernandes advanced in the area.

The referee, Carlos Velasco Carballo, booked Martial, awarded the penalty, and after David De Gea saved Roman Eremenko’s effort on to his right post it pin-balled off the goalkeeper’s leg and Seydou Doumbia finished.

This had the Arena Khimki bouncing and United rocked after what had been a bright start. This had involved Martial, Bastian Schweinsteiger and the surprise selection, Jesse Lingard, passing and moving fluidly. Now Mário Fernandes continued to trouble United down the Martial-Marcos Rojo corridor, where the latter was the left-back and where earlier the Brazilian attacker had fired a ball across the area at an unmarked Zoran Tosic.

Lingard’s inclusion followed his entrance as a halftime replacement in Saturday’s victory at Everton. It was only the 22-year-old’s second start, after Van Gaal chose him for the opening day of last season. Then United lost to Swansea City and Lingard suffered a serious knee injury.

So this was the big time and a big chance for the boy from Warrington. As the United Twitter feed said: “Big night for Jesse Lingard, who makes his Champions League debut!”

Van Gaal explained: “[LINGARD] played a very good second half [AT EVERTON], I have to say. But I also have to rotate. Juan Mata has played every game so he needs a bit of a rest.”

When United roved forward Lingard was a factor, making intelligent runs from right to the left that posed questions for Leonid Slutsky’s side. On one occasion Lingard was found inside the CSKA area, and was unlucky not to advance on Igor Akinfeev’s goal with a dribble.

This proved a rare brightness for a United XI showing two changes from Everton with Antonio Valencia replacing Matteo Darmian. CSKA seemed capable of scoring whenever they entered United’s half as Ahmed Musa illustrated with a 25-yard shot that brought a superb De Gea save.

Van Gaal had placed Wayne Rooney at centre-forward and Ander Herrera behind him in the number 10 berth. As the interval approached Rooney had threatened only twice. For the first chance his touch failed when Herrera threaded the ball through. The second time Martial pinged in a cross from the left but Rooney’s run lacked anticipation.

There was a further scare when Valencia should have hoofed the ball clear, but did not, and Musa forced the right-back into conceding the corner. This came to nothing but when the sides wandered off at half-time Van Gaal had some serious thinking to do.

A switch of Rooney for Herrera so that the latter could move on to the left and allow Martial to play at No9 may have been chief among his thoughts.The first move the Dutchman made was to take off Schweinsteiger and bring on Marouane Fellaini, the Belgian slotting into an quasi-advanced midfield position for the second half.

A year to the day since Manchester City drew 2-2 here after being two up in a group match, United had arrived hoping to continue momentum in the competition as victory over Wolfsburg had followed the loss at PSV Eindhoven in the opener.

CSKA, though, had shown why they were unbeaten since 15 September, had won four of their previous five outings, and head their domestic league by five points.

The sight of Phil Jones launching a hopeful high ball to Martial which missed the Frenchman was hardly the best augury that United might be about to find an equaliser with precision football. Fellaini’s introduction also enhanced the sense that Van Gaal had instructed his team to reach for the blunt instrument rather than the scalpel.

Fellaini was pushed up for the last half hour by Van Gaal and United entered this closing period on the front foot. Herrera found Rooney’s head but the effort went straight to Akinfeev. Lingard got in behind the CSKA defensive line but was flagged offside.

Now, at last, came United’s equaliser and this was a moment of purer football. Herrera slid the ball into Valencia along the right. He stood the cross up perfectly and Martial, from a classic central striker’s position near the penalty spot, headed home.

Science shows that sports events going ahead was ludicrous 07:13
Learning from New Zealand’s return to sport; Trump gets back on the course 06:53
Zoom calls with Rory and the GUI bake-off: Neil Manchip keeping the flag flying 06:00
Sonia O’Sullivan: How to keep your competitive edge from going blunt 06:00
Safe return to play in New Zealand showcases the true value of sport 06:00