Satisfied with performance in 3-1 defeat to Chelsea 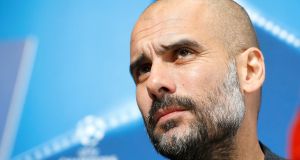 Pep Guardiola offered a glimpse of his unique vision of football when he said Manchester City had been better at times this season than his gilded Barcelona and Bayern Munich sides. Ahead of the club’s final Champions League group match on Tuesday night, a dead rubber against Celtic, the word he chose to describe City’s finest passages of play under him was faster than Barça and Bayern.

This may cause some surprise given the quality of those previous teams. Barcelona claimed 14 major trophies, including two Champions League titles, between 2009 and 2012, while the count at Bayern was seven in three seasons. In particular, the Barcelona team who swept all before them in Guardiola’s first season as manager are considered one of the finest sides in history.

Yet just 23 matches into his City tenure, Guardiola was full of praise for his side despite their defeat by Chelsea on Saturday, when they conceded three times in the final 30 minutes before Fernandinho and Sergio Agüero were sent off.

“We play good, faster than in Munich and even in Barcelona, when we had one player [Messi] who was amazing and helped us to create those steps,” he said. “In general, I am so satisfied in the short time we have been together. We attack with 10 players and try not to concede on the counterattack. I decide this because I did it all my career, attacking smaller spaces and defending bigger spaces. For that you need time, but I am sure when you are able to do it you are more attractive and you are more safe.

“Of course, we need time in a world [where] we don’t have [it]. But in general I’m satisfied. When we are talking about the last game, I’m so satisfied. I saw again the game and what we have to improve and how many things we did well.”

As to his comparison of City with Barcelona and Bayern, Guardiola’s view that the display in losing to Chelsea gives him hope that “this season is going to be good” may seem counterintuitive. A Guardiola mantra, though, is that what matters is how well the side play rather than, necessarily, the result.

Also stark is his contentment with life in English football after an opening four months.

“I am enjoying it a lot,” Guardiola said. “Of course, when I win I am happier and when I don’t win I am not so happy. I am enjoying working with the guys and where I am working. I am trying to do my best. The biggest challenge was when I started working at Barcelona. I had to create my career. I go to Germany to improve myself, I come here to improve myself. I would not be here if in Barcelona I didn’t make [it] good. It would be another coach here. I was in Bayern Munich because I was quite good in Barcelona. I am here because I was quite good in Germany.”

With qualification secured for the Champions League knockout phase, the last-16 draw in Nyon on Monday is keenly awaited. Yet Guardiola believes current form may be irrelevant in relation to City’s chances of progressing against whoever they will meet in the spring.

“In my experience in the Champions League, it is how you arrive, how you are, in February,” he said. “Now Monday is going to be the draw and we will analyse the team and say who is the favourite to go to the next round. But in February many things are going to happen before. That is why I am so happy to be [already] there, to prepare the game. I have to focus on Leicester [City] and Watford and Arsenal [in the Premier League]. What I have to think about as a coach is the way we play.”

Willy Caballero could be in line to start for City against Celtic on Tuesday after he was presented to the media at Monday’s pre-match conference. Despite the game being academic in terms of qualification, the goalkeeper will have no problem regarding focus if he is selected.

“I think just playing in the Champions League is a big motivation,” the Argentinian said. “When you hear the hymn or the song of the Champions League, it’s a big motivation for every player. It’s the most important competition in the world, for a team, for a player. This is enough, but you have to respect this kind of game. We are going to play against a champion team. We have to be focused and play in the same way that we did against Borussia and Barcelona.”