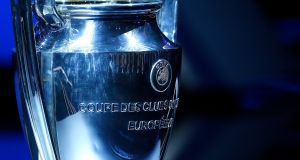 Uefa have announced four sides from Europe’s top four leagues will be guaranteed a place in the Champions League group stages. Photograph: Epa

The Premier League is set to have four teams qualifying automatically for the Champions League group stage from the 2018-19 season.

Uefa announced at a press conference on Friday that Europe’s leading leagues in their co-efficient rankings — currently the Premier League, Spain’s LaLiga, Germany’s Bundesliga and Italy’s Serie A — will all have automatic qualification for top-four finishers.

Under the current system there are automatic spots for the top three English, Spanish and German clubs, with a fourth having to qualify through a play-off.

In Italy only the top two qualify automatically with third contesting a play-off, which their clubs have failed to negotiate for the last three seasons.

The move, which is understood to have been championed by representatives from Spain and Italy, has partly been driven by the potential threat of a breakaway European Super League by top clubs

Other changes implemented by Uefa, to take effect in 2018 when the new three-year commercial cycle begins, will see clubs judged on their own records, deleting the country share for the individual club coefficient unless that coefficient is lower than 20 per cent of the association’s coefficient.

Historical success in the competition will also be acknowledged in coefficient calculation with points awarded for previous European titles while financial distribution to clubs will be increased significantly for both the Champions League and Europa League.

“The evolution of Uefa’s club competitions is the result of a wide-ranging consultative process involving all stakeholders and taking into account a wide range of expertise and perspectives,” said Uefa general secretary ad interim Theodore Theodoridis.

“The amendments made will continue to ensure qualification based on sporting merit, and the right of all associations and their clubs to compete in Europe’s elite club competitions.

“We are happy that European football remains united behind the concepts of solidarity, fair competition, fair distribution and good governance.”

Karl-Heinz Rummenigge, chairman of the European Clubs Association which lobbies on behalf of teams playing in continental competition, said: “I welcome Uefa’s decision, it reflects a serious and fair solution for European club football. I am particularly pleased with the fact that the European football community remains united moving forward.”

Man United and Chelsea play out drab draw in the driving rain 19:54
Antrim too good for Waterford in league clash in Dundalk 19:09
Jim Bolger enjoys a fine day on both sides of the Irish Sea 19:07
Championship: Browne and McClean on scoresheet as Idah sees red 19:04
Wicklow edge Division Four winner takes all clash with Wicklow 18:59