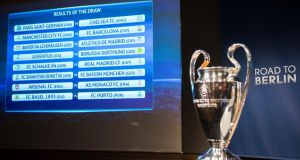 The match fixtures are shown on a panel following the draw of the round of 16 soccer matches of the UEFA Champions League 2014/15 in Nyon, Switzerland, Monday, Dec. 15, 2014. The final is scheduled for June 6 at the Olympic Stadium in Berlin. (AP Photo/Keystone,Jean-Christophe Bott)

This year’s draw for the knockout stage has thrown up some tantalising games, including Manchester City’s clash with Barcelona and a tough encounter between Chelsea and PSG. But who will progress?

Chelsea v Paris Saint-Germain José Mourinho claimed he wanted to face Laurent Blanc’s side because the journey to Paris is simple, but PSG are the strongest team Chelsea could have drawn. This is a repeat of last season’s quarter-final, where Chelsea struggled in the away leg, before winning the tie at Stamford Bridge after Mourinho went all-out-attack in the final stages, using three strikers simultaneously.

Who will go through? Chelsea - now have more attacking firepower

Barcelona v Manchester City This is another repeat from last season. Barcelona dominated possession at the Etihad without converting possession into chances – until Martín Demichelis’s foul conceded a penalty, leaving City down to ten men. Lionel Messi and Daniel Alves scored in both legs as Barca won 4-1 on aggregate. Manuel Pellegrini caused Barça problems in his days with Villarreal, however, and might encourage his team to compete more ferociously against a Barcelona side lacking such cohesion in midfield. Sergio Agüero, who missed last season’s first leg and only managed 45 minutes at the Camp Nou, could make the difference.

Who will go through? Barcelona - front three will prove too much for City

Arsenal v Monaco Arsène Wenger will be delighted. Not only will the manager return to the club where he made his name, winning Ligue 1 in 1987-88, it is also an excellent draw for Arsenal. Monaco won Group C but were not particularly impressive at any stage: they averaged the least possession of any qualified side (46%), managed the second-fewest shots of any of the 32 group stage competitors, and scored only five goals in six games.

Monaco have some good players, particularly the midfield trio of Jérémy Toulalan, Geoffrey Kondogbia and João Moutinho, and rampaging full-backs Layvin Kurzawa and Fabinho – but Arsenal should progress.

Who will go through? Arsenal - should be a comfortable victory

Real Madrid v Schalke A third repeat from last season’s knockout stage. Real won 6-1 away, 3-1 in Madrid, and we should expect another resounding victory for Carlo Ancelotti’s side, who won all six group games. Real are a terrifyingly complete side, boasting good ball retention in the centre of midfield, plus two of the world’s best counter-attacking players in Cristiano Ronaldo and Gareth Bale.

Schalke’s Julian Draxler and Eric Choupo-Moting are dangerous on the break too, but this is likely to be one-sided. Schalke conceded 14 goals in Group G, and Roberto Di Matteo’s arrival has not changed their fortunes significantly.

Who will go through? Real Madrid – probably by a landslide

Bayern Munich v Shakhtar Donetsk The Ukrainian champions were impressive in the group stage, and Luiz Adriano is the competition’s top goalscorer with nine goals – but further progression will be difficult, especially as Shakhtar are forced to play home matches in Lviv, 750 miles from Donetsk. Pep Guardiola will enjoy his tactical battle against the wily Mircea Lucescu, who will instruct his team to play a reactive counter-attacking game, hitting Bayern with pace. Guardiola’s side should have too much, however – their 7-1 thrashing of Roma is the best performance of this season’s competition, and Guardiola might have a fully fit midfield by February, too.

Who will go through? Bayern - simply stronger in every area

Borussia Dortmund v Juventus This could be the second round’s most interesting tie. Dortmund are struggling badly in the Bundesliga but remain impressive in Europe, while Juventus are three-time Serie A Champions but have been unable to reproduce those performances in the Champions League. Juventus’s defensive record this season is excellent, and they’ll be confident of shutting out a Dortmund side yet to adapt to Robert Lewandowski’s departure. However, Juve often struggle in Europe against high-tempo, heavy pressing sides – and that’s precisely what Jürgen Klopp’s side are all about. Paul Pogba and Arturo Vidal must be at their best to match Dortmund’s energy and strength.

Who will go through? Dortmund - Juve will struggle with their intensity

Atlético Madrid v Bayer Leverkusen This is another interesting tie, between two extremely high-rated young managers. Diego Simeone rightly received acclaim for leading Atlético to last season’s La Liga title and European Cup final, with the defensive structure and counter-attacking energy of his side particularly impressive. Atlético lack the latter without Diego Costa, though – Mario Mandzukic is a different type of striker. Under Roger Schmidt, Leverkusen are similar to Atlético. There’s not a particularly big emphasis upon possession, but Leverkusen’s dynamism and intensity is often spectacular, and therefore this should be a clash between two energetic, counter-attacking sides. Leverkusen might be the tournament’s dark horse.

Who will go through? Leverkusen - could provide a shock on the break

Porto v Basel The least exciting second round tie: a clash between two sides renowned for developing young talent. Porto lost their first game of the season on Sunday, a 2-0 defeat against rivals Benfica, but they are an impressive unit under Julen Lopetegui, who experienced great success with the Spanish youth sides, and has continued with Porto’s 4-3-3 system while introducing some promising youngsters loaned from Spain’s big three. Basel are the weakest side left in the competition, and while they’re miles clear in their domestic league, qualifying for this stage with a negative goal difference suggests they will struggle to progress any further.

Who will go through? Porto - more organised and more technically talented

Stuart Lancaster knows Leinster’s strength in depth will be key in busy schedule 05:30
Corofin’s quality won’t have chance to shine on biggest stage 05:00
Heroic insanity: When Michael Dunlop raced home in memory of his father 05:00
Gerry Thornley: Consistent trailblazers New Zealand once again ahead of the posse 01:00
Manchester United huff and puff their way into semi-finals 22:51