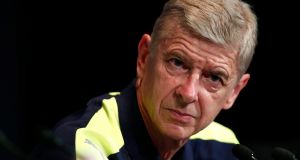 Arsene Wenger believes Arsenal’s heavy investment this summer and greater experience throughout their squad leaves them better placed to force passage into the latter stages of the Champions League than in recent seasons as he prepares to lead the club into a 19th successive campaign in the competition.

The Premier League club, who have exited Europe in the last 16 in each of the past six seasons, have been handed the daunting task of competing with Paris Saint-Germain in Group A. The French side, so dominant in their domestic league since being purchased by Qatari Sports Investments in 2011, have been quarter-finalists four campaigns in succession and were the highest-ranked side in the section. However, Arsenal will approach Tuesday’s game at Parc des Princes with some optimism because Unai Emery’s team are hampered by a number of injuries. They have also stuttered in their past two Ligue 1 games and are still adjusting to the new manager’s methods.

Whereas PSG have lost two of their more talismanic players in Zlatan Ibrahimovic and David Luiz to Manchester United and Chelsea respectively, Wenger spent close to £100m in the summer bolstering his squad. The vast majority of that went on experienced performers such as Granit Xhaka, Shkodran Mustafi and Lucas Perez - players the manager is convinced can demonstrate their influence in Europe’s elite club competition.

“I was used to playing with younger squads because, when you build a new ground like the Emirates Stadium, you don’t have the resources,” said Wenger, who has entered the final year of his contract but refused to be drawn on whether this would be his last campaign in the Champions League.

“Now I have a team with more experienced players. There are exceptions, obviously, but the majority of the squad is basically between 24 and 30 in age. That’s where you have a good combination of physical strength and experience.

“They are not 19 or 20 years old. This is one of my strongest squads, certainly. And certainly one of the oldest as well. I always believed we had a chance, even when we had young players but, certainly, I haven’t had a squad of players [like this]for a long time; full of players who have enough experience to compete.” They will benefit from the presence of the France defender Laurent Koscielny after he recovered from the facial injury sustained in Saturday’s victory over Southampton.

Wenger is expected to hand Olivier Giroud a start up front here in a tie that pits him against the club that tried to tempt him away from London three times – in 2011, 2013 and 2014 - to spearhead the Qatari-funded project in Paris. He is a close friend of the PSG president, Nasser al-Khelaifi, having worked on the owners’ television station, Al Jazeera turned BeIn Sport, and has previously admitted to advising them when it emerged they were interested in purchasing a football club.

Asked why he was never tempted to return to France to oversee PSG, Wenger said: “Because I love where I am. I know well the PSG owners but I feel always I remained loyal to Arsenal Football Club because I think it’s a club that has the qualities I love. And that’s why. This is an important game but I don’t think it goes beyond two good sides playing against each other. There’s no symbolism to it, no symbolic meaning to this match. We just want to pick up the three points.”

They will have a better opportunity than originally envisaged against an uncharacteristically fragile PSG side who have laboured at times since Emery replaced Laurent Blanc over the summer.

The Spanish coach has come in for considerable criticism after seeing his side lose at Monaco and then concede a late equaliser at home to Saint-Etienne last Friday. He was visibly unnerved by the tone of some of the local questioning at his pre-match media conference at Parc des Princes on Monday. He reverted to his native language three times to try to make his point, and stressed that managers need time to impose their philosophies on new teams, “though in football we are rarely given proper time”. He hopes to have Thiago Silva fit for the first time this season, the Brazilian having played a full part in training at Camp des Loges. Layvin Kurzawa, Javier Pastore, Serge Aurier and Maxwell - all of whom were doubtful for this fixture - hope to play a part, too.

“It’s fair to say both sides are still looking to find the right tempo and rhythm to their play,” said Wenger. “We had a slightly tough start with a few players late back after international duty over the summer. We also had a tough fixture list with regards to our fitness levels but thankfully we are mentally strong enough to make our way gradually into better form. Mentally we are ready. Physically we are not quite ready so far.

“PSG, too, have been missing a number of players and some had joined up a bit later, like us. But we’ll see. Better than all my speeches is the way we play, the dynamic we have and the intensity we put into the game. We play in a championship where, if you look at the results over the weekend, it’s very intense. We are used to playing with the intensity you need in the Champions League. That’s what we want to do. Playing well is better than talking.” Guardian Service