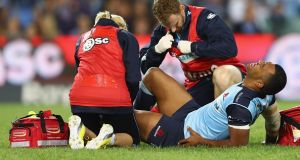 Kurtley Beale had to be stretchered off after picking up a knee injury the day after his move to Wasps was announced. Photograph: Getty

New Wasps signing Kurtley Beale was carried off on a stretcher in the opening minute of the NSW Waratahs’ home clash against the Bulls on Saturday with a knee injury.

Beale sustained the injury as he challenged for high kick after less than 30 seconds of the Super Rugby fixture at Sydney’s Allianz Stadium — just a day after signing a deal with Wasps which will reportedly make him the Aviva Premiership’s highest-paid player.

The 27-year-old Australia back was in obvious discomfort as he was treated on the pitch before being taken off on a stretcher cart.

The Waratahs have yet to make an official announcement but former Wallabies captain Michael Lynagh, summarising on Sky Sports 3, said Beale had been taken to hospital for tests but hopes the injury is not a bad one.

Lynagh, having spoken with people in Sydney who had been in contact with Beale, said: “They don’t think it’s quite as bad as what they first thought, but Kurtley’s been taken straight to hospital now and he’s going to have scans and all that sort of thing done.”

On how Beale sustained the injury, Lynagh said: “It looks like there’s turf that’s being replaced at the stadium and it looked to me like Kurtley, when he went up on his left leg to try and get power to go up, it just slipped a little bit and gave way, had no power and that’s when he did it.

“I hope he’s okay and it’s not as bad as first thought, as they are saying down there.”

Beale, who has won 60 international caps, is understood to have agreed a one-year contract at Wasps with the option for a 12-month extension if his initial spell at the Ricoh Arena proves to be a success.

Australia host England in three internationals next month, in Brisbane, Melbourne and Sydney.