Ashbourne RFC to continue as home venue for Scotland and Wales 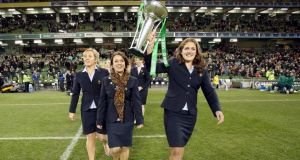 Lynne Cantwell and Fiona Coughlan along with teammates acknowledge the crowd before the Autumn Series Test against Samoa at the Aviva Stadium. Photograph: Inpho

The Ireland women’s rugby team will play at the Aviva Stadium for the first time on Saturday, March 8th, 2014. Italy will provide the opposition for Philip Doyle’s team in the last fixture of their Grand Slam defending season.

The game is to take place after the men’s Six Nations fixture, which kicks off at 2.30pm.

Ashbourne RFC has provided the home venue for Ireland these past five years with the local community embracing Fiona Coghlan’s women long before they embarked on this year’s championship winning campaign.

“We had only 300 supporters attending the first match here five years ago but that grew to 1,800 for the victory over England this season and there was a crowd of 4,000 for the French,” said Ashbourne club chairman Rod Cosgrave.

The President of Ireland Michael D Higgins was also among the crowd for that penultimate Six Nations encounter against France, which ended 15-10, on a bitterly cold March 8th night.

Ireland went on to clinch the championship, thanks to the boot of Niamh Briggs, with a 6-3 victory over in Italy despite more atrocious conditions at another provincial venue outside Milan. “After such a small crowd for the first game we advertised the next one around the town and the team were embraced by our community,” Cosgrave continued. “Saturday afternoon fixtures never really worked but Friday nights has proved more and more successful each year.”

Twickenham fixture
But now, after 132 years in existence, the national stadium for rugby will provide women with the same stage to perform as the men. By then they will already know what it’s like to play in such salubrious confines as they face England at Twickenham on February 22nd. That match also follows Joe Schmidt’s team, which kicks-off at later time of 4pm. They played there previously in 2004.

England’s encounter against France this month was also played after a men’s international in a largely-empty stadium despite those attending being allowed to stay on for no extra cost.

How the IRFU intend to market their own fixture is yet to be revealed.

Traditionally the union used to have A fixtures at Donnybrook on the eve of international weekends. However, Ashbourne RFC will continue their partnership by hosting the Scotland (January 31st) and Wales (February 7th) games in the now established Friday night slots.

The club gets to keep revenue from the gate, which they must also use to cover costs, but they save a substantially on labour costs through club volunteers.