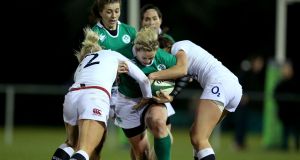 For all the value Niamh Briggs brings off the kicking tee and recalled pivot Nora Stapleton adds to the backline, neither of them possess a long-range boot to clear the lines off, say, a Claire Molloy turnover.

Briggs was also forced off that night in 2014 with a collarbone injury as England out-muscled their smaller guests in what proved a precursor to their World Cup triumph six months later (achieved with a little assistance from Ireland knocking over New Zealand in the Pool stages).

If Sarah Hunter’s pack do get a foothold in Irish territory they will prove very tough to remove. And while Sene Naoupu has added cutting edge and defensive intelligence to Ireland’s midfield, softening the blow of Jenny Murphy’s commitment to Sevens, playing any team branded with the red rose will be decided at the coalface.

That makes the benching of Heather O’Brien, heretofore pack leader, with Ciara Griffin making her starting Six Nations debut at blindside and Paula Fitzpatrick switching to number eight, an interesting selection by coach Tom Tierney. The plan, presumably, is to introduce O’Brien, a Cork physiotherapist currently playing semi-professional rugby in Toulouse alongside Fitzpatrick, for the grinding last quarter.

“Ciara is a very physical player, key around the breakdown, in the vein of Seán O’Brien in that she always wants to get her hands on the ball and motor on,” said Maz Reilly. “I’m very excited to see her play.”

Same goes for Ireland with winger Ali Miller, the tip of the spear en route to capturing last season’s championship, also off dodging girls on some Brazilian paddock.

Tierney knows all about how unforgiving Twickenham can be; the former scrumhalf’s eighth and last senior cap came on this patch all the way back in 2000. That 50-18 pummelling finished off the international career of a few well-known Irish players.

That won’t be the case here at all. Ailis Egan, Sophie Spence and Reilly’s lineout should ensure plenty of possession.

“Set piece is something we pride ourselves on. One of their secondrows, Tamara Taylor, is on the subs bench so that is a loss for them. We will look to target that. There is a new player come in, Emily Braund, seems quite dynamic for them but we will look to ruffle her feathers in the lineout.

The Italy and Scotland fixtures are still to come but points differential already leaves Ireland, on plus-6, with an outside chance of reeling in France (+51) and England (+41). Putting the loss of Sevens players to one side, as it more or less evens things out, Ireland have a real chance here. They just need to ensure they don’t get bogged down in their own 22. Because it can take an age to find a way back upfield.

Also, a first win on English soil would fit neatly with the upward trajectory of the Ireland women’s team since the 2013 Grand Slam, 2014 World Cup semi-finalists and 2015 Six Nations champions.

“ We do want to break down more barriers. A famous win away to England would put us back on track and keep our hopes alive of retaining the championship.”

Plenty on the line so.