Former Kilkenny College player has not done it the easy way 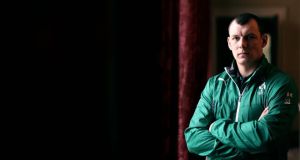 For some it would be a journey’s end. To Robin Copeland it’s a new beginning and when he lines out for Munster next season, a coming home of sorts.

Stories of spirit pepper sport but few are as well a kept secret as the Gorey backrow, who slipped out of St Mary’s College and four years later reappeared on a list held by Ireland coach, Joe Schmidt.

Copeland’s reappearance into Irish view should not only dampen down any considerations that out of Irish rugby sight means out of Irish rugby mind but reaffirms that for every three talented players there is maybe a better one with work ethic and graft. Luckily Copeland has both.

“I moved to the UK four years ago with a dream of getting into a situation like this,” he says adding in an almost sage like fashion. “I always looked at stepping stones.”

‘Mushrooms in the bathroom’

“When I first moved to Plymouth (Albion), I was living in a tiny, shitty apartment attached to the club that had mushrooms growing in the bathroom. It was freezing cold, damp, horrible.

“My contract was so bad I got a job behind the bar in the golf club as well to try and pay for it.

“Like, I was skint. But I was playing rugby and I was happy enough. I had been a student for the last four years and I was still living a student life, nothing really had changed.

“I’m not really one to complain anyway, but yeah looking back that was the lowest point.”

Moving away from Dublin and Leinster’s sub-academy ensured the beginning of the passage home.

Plymouth led to a time in Rotherham Titans and there, with the help of former Ballymena coach Andre Bester, the Kilkenny College graduate caught the attention of Cardiff Blues.

A couple of man-of-the-match awards in the Heineken Cup, interest from Rob Penney in Munster and a call from Schmidt’s Irish team –“a physio or someone” – once more angled his career graph upwards. More stepping stones.

“Nothing happens in a straight line,” says the 26-year-old, again as though he has considered it. And from his playing career you can see why.

“If I didn’t think I was ready I knew I had the capability to change those things and improve. There have been moments where I doubted myself. But you work on those things

“I was fresh out of college and I was like, ‘Aw, I’ll give it a bash, if it doesn’t work I’m exactly where I am now a year later, I’m not going to lose anything.’

“Then I realised I had an opportunity there. I had maybe what it took to make a good career out of it.

“And it was only about three years ago that I really decided to put my heart and soul into it, and thankfully . . . it’s been a long road but it’s start to come right.”

The match against England Saxons represents more opportunity. He knows Jamie Heaslip owns the number eight shirt and hopes to do so for three more years.

But there’s a free-wheeling attitude to Copeland that is ambitious, hopeful and also open minded about where the sport can take him. There’s steel too, has to be in the backrow.

But he’s feeling his way, reticent to other players about his journey there and back and there’s a drive to show he’s no sleight of hand trick, a white rabbit plucked from a hat by Schmidt.

“I haven’t really talked about it with them but playing against those guys I’ve kind of built up a kind of respect again,” he says. “Well I hope they’d kind of respect me a bit now because of what I’ve done and how hard I’ve worked to get back here.

“I haven’t really verbalised any of that to be honest.”

By now they will have seen Cardiff play. He doesn’t need to.