After a dramatic 15-15 result in the last game of the series Warren Gatland and Sam Warburton reflect on the Lions performance and the referee’s last minute decision to reverse a New Zealand penalty. Video: Reuters 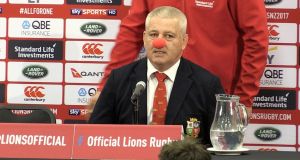 Warren Gatland couldn’t resist it. He’d thought about doing it after the Lions’ win in the second Test, before deciding it was not the right time or place, but on entering the post-match press conference in Eden Park the Lions’ head coach donned a red nose.

It was a pointed reference to the New Zealand Herald portraying him as a clown for the second time during this tour, all the more so as he knew journalists from that publication were in the room. It drew a round of laughs – from the travelling media anyway.

He appeared marginally the happier of the two head coaches with a drawn series, which Gatland would be entitled to feel.

“I suppose we’ll reflect on it tonight and just say, given the schedule, given how tough the tour was, to come to New Zealand and draw the series, you’ve got to be pretty proud of that.

“I think both teams will be a little frustrated thinking a win would have been nice. We felt that we didn’t play that well tonight. I was talking to Wayne Smith [New Zealand assistant coach afterwards, and we were saying that it was a game for defences tonight, a lot of turnovers by both teams. I hadn’t realised how slippery the ball was. It was very greasy out there.

“But if you’d said six weeks ago we’d come to New Zealand and draw a Test series, you’d probably take that.”

Indeed, it’s been some journey. Gatland continued: “We’ve felt, as a team, that we’ve learned a heck of an amount on this tour and the quality of opposition we’ve played. We’ve been lucky we haven’t picked up too many injuries, and we’ve felt we’ve got better as the tour has gone on.

“And that’s because we’ve been really tested and been pushed, and we’ve learned from the quality of opposition we’ve come up against, that’s put us in good stead. The All Blacks threw everything at us in that first 20 minutes, and we hung in there. And that’s what good teams do. They hang in there. We spoke at half-time and we knew we hadn’t played that well in the first half but we were still in the game at 12-6.”

Asked for his thoughts as Romain Poite changed his decision to award a penalty to New Zealand into a scrum, Gatland said: “I thought it was a penalty to us. I thought Kieran Read jumped into [Liam Williams]. I don’t think he had any chance of getting his hand on that. That was my initial thought, that he’s hit the player in the air.

“I can understand, the ball’s landed in Ken Owens’s arms, and in fairness to the man next to me,” said Gatland in reference to Sam Warburton, “he has been quite smart and astute in being able to talk the referee from a penalty into an accidental offside.

“We would have been devastated as a group to have lost the game from that kick-off. I was disappointed with the scrum penalty under the posts, but it’s swings and roundabouts. You sometimes get calls that go for you and against you. I thought the result was probably a fair reflection of where the tour is, and two quality sides who really went hard at each other tonight.”

Gatland would not have been disposed towards extra time. “I think those provisions have to be put in place beforehand. I was asked after the game if I’d be happy with extra time and I said ‘yea, absolutely, because you have that winning mentality, you want to win the game.

“I spoke to Steve Hansen after the game and his first comment to me was that it feels a bit like kissing your sister. For us to come here and to New Zealand against the back to back world champions and draw the series, I think it was an unbelievable achievement considering we were completely written off.

“Everyone was talking about a three-nil whitewash. And this group of players have shown unbelievable character. It’s been a tough tour in terms of the effort and the workload on all the staff in terms of preparing two teams a week. The players have been brilliant role models.”

Hailing the hospitality of his fellow Kiwis, Gatland added; “As a Kiwi, I’m biased but it’s the most beautiful country in the world. The New Zealand public have been very hospitable, and everywhere we’ve been there’s been nothing but goodwill. The occasion tonight and the atmosphere is what makes the Lions so special and so unique.”

The Barbarians are scheduled to play the All Blacks in November and when it was put to Gatland that perhaps they could be replaced by the Lions, he said: “That would be good wouldn’t it? Maybe we should think about that, but you’ll have to ask PRL [Premiership Rugby] if they’d release any of the players.”

Hailing his players as great tourists, and New Zealand as great hosts, Gatland said: “It’s been a great series. What was disappointing for me, was how much negativity was out there. I think we should embrace this, I think it’s been brilliant.

“I think a lot of negativity turned the Kiwis off supporting the All Blacks. They were very much hoping that we’d do well, and that as a team and tour we’d embrace New Zealand.

“But that’s finished now, so we’ll just enjoy the next couple of days as a squad and reflect back on what this group of players have achieved.

Regarding Seán O’Brien’s injured left shoulder, Gatland said: “I spoke to him just before coming to the press conference. He said it’s a little bit better than it was at half-time. He just had no power in his left shoulder. We’ll just see how he turns up tomorrow. We’ll probably look to get him scanned and see. He’s got a piece of his hip in there, which replaced some bone in the past.”

Reflecting on his typically polite and persuasive request to Poite that he go to the TMO to check if Read had hit Williams in the air, which effectively secured the Lions a draw as it then led to Poite decreeing Owens was guilty of being accidentally offside, Warburton said: “I just asked him to check for the accidental offside. I can’t really remember what I said. It’s a shot to nothing. They had awarded the penalty. All game he was quite receptive at looking at things.

“This series they’ve been really good at being able to go back and have a look. Obviously if you question something 10 to 15 times a game they won’t be receptive, but I think less is more.”

In the furnace, he’s a clear-headed captain whose relationship with referees has never, nor ever will be, more valuable.

As for his decision to point to the posts for Owen Farrell to pull the sides level in the 78th minute, Warburton said: “It was a tough one when we were awarded the penalty, and I’ll think about it for a long time. Do you go for the foot on the throat, or do you take the points? I thought in that situation better safe than sorry.

“They are decisions that are 50-50. It’s a difficult decision to be in, that’s where you need your other guys, you don’t make that call by yourself. At that point we all agreed the three points was the best decision.”