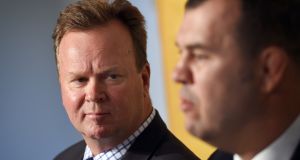 The Australian Rugby Union’s chief executive, Bill Pulver, has reacted with relief to news that New South Wales police have charged a man in relation to the discovery of a listening device in the All Blacks team hotel before a Bledisloe Cup match in Sydney last year.

An investigation was established after the discovery of the audio device in a Double Bay hotel room in August 2016 and, on Tuesday, a 51-year-old was charged with public mischief.

The man, who the ARU said was, at the time, employed as a security consultant, will appear at Waverley local court on March 21st.

“On behalf of the ARU, I commend the NSW police for their ongoing pursuit of this matter and for providing closure with a charge being laid against an individual today,” Pulver said.

The All Blacks issued a statement later on Tuesday in response to the latest development of the saga which soured the mood between the two nations ahead of the series opener – a match the All Blacks went on to win 42-8 to inflict a record defeat on the Wallabies on home soil.

“It’s very hard to understand,” the All Blacks coach, Steve Hansen, said. “The charged man has worked for the All Blacks, and many other organisations, for a long time and is someone who is trusted and well respected by us.”

The finger of blame was never officially pointed at the Wallabies and, at the time, Pulver said it was “completely ludicrous” to suggest the ARU had any involvement in the planting of the device.

Six months on, Pulver was still upset at the lapse in time between the discovery of the device and the reporting of it to police, a delay of five days that the All Blacks coach, Steve Hansen, had explained by claiming the team’s management decided it was best to wait until the arrival of New Zealand Rugby Union chief Steve Tew, who was travelling to Sydney from the Rio Olympics.

“Clearly the media attention which resulted from it was a distraction that neither team needed on the morning of a very important Test match.

“The ARU and the Wallabies were never accused of any wrongdoing. However, it was still important that this matter reached a conclusion to provide complete reassurance to all fans that the organisation and the team had no part in any of this.

“There may be some questions that remain but certainly it is welcome news that an individual has been called to account over this incident.”