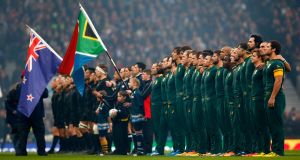 The pressure that Ireland coach Joe Schmidt came under recently to introduce new players to his squad pales in comparison to what his newly appointed South African counterpart, Allister Coetzee, is about to face.

When the Irish team takes to the field in the Newlands Stadium in Cape Town on June 11th for the first of three Tests against the Springboks, form and injuries will be the major factors dictating Schmidt’s squad selection.

For Coetzee, however, the weight of South Africa’s apartheid history will also bear down on his team selection and his resulting choices will be scrutinised like never before.

Like all recent Springbok coaches, Coetzee is tasked with taking a squad of players to a World Cup (the next is in Japan in 2019) capable of winning the trophy, but equally, he must ensure that at least 50 per cent of those involved are black.

Under apartheid, sports such as rugby were segregated at all levels. As a result, successive post-apartheid governments have maintained that transforming teams from predominately white player and management groups to ones more representative of the population has been a priority.

But until recently it appeared that the South African Rugby Union (SARU) and the national team, as well as the country’s six professional teams, were only paying lip service to these transformation goals.

Some 84 per cent of South Africa is comprised of black people, and a further nine per cent is considered of mixed race – a group known locally as ‘coloureds’ – and all sporting bodies are compelled to better reflect this demographic in their coaching, administrative and player bases.

Although black representation at under-age and amateur level has increased significantly over the past 22 years, and better reflect the nation’s ethnic make-up, professional rugby continues to be predominately white.

At its launch in early 2015, SARU chief Jurie Roux emphasised the transformation plan was not a quota system that would be forced on professional teams, but rather a road map for them to help achieve representation targets.

Government has taken a tougher stance though, insisting rugby will change or face the consequences.

One of the plan’s key targets is that for a team to be regarded as “transformed”, it must have at least a 50 per cent generic black representation. Within that percentage, the expectation is that half of these players will be black African.

Roux went on to say that across the code, rugby had changed for the better since apartheid’s demise, but he conceded: “We know that we are only judged on representation in the Springbok team.”

Yet despite the fanfare and promises, little has changed so far. Indeed, it has been reported that SARU is due to deliver a progress report around this failure to the strangely named, Eminent Persons Group, the authors of transformation guidelines in sporting codes.

In the document, they are expected to explain why former Springbok coach Heneke Meyer failed to field the agreed minimum number of black players in all but one of his team’s 11 Tests last year. As an incremental way to meet SARU’s 2019 transformation targets, Meyer was supposed to field seven black players in each match-day squad of 23.

Shortly before the Rugby World Cup in England, a number of black and coloured players vying for places in the Springbok squad had approached union federation Cosatu to air their grievances in relation to this, says its Western Cape regional secretary Tony Ehrenreich.

“The squad players felt they were being treated unfairly in a number of ways. For instance, they weren’t getting enough game time in their Super 15 teams, or on the national team,” recalls Ehrenreich.

“When potential opportunities were coming up through injury, the coaches continued to select white players, even playing them out of position, rather than selecting black players. Furthermore, they believed the more lucrative contracts were going to white players.”

Rugby analyst and blogger Shaun Lilford agrees that Meyer’s team selections were questionable, as there were a number of black players excelling in their Super 15 teams who failed to get opportunities in Springbok match-day squads.

“You had guys like Lional Mapoe and Howard Mnisi, who both play centre for the Lions and were on fire, and they were not getting a look-in. I was expecting a lot more black players to come through last year, but it didn’t happen,” he says.

Others such as Elton Jantjies, Juan de Jongh, Cheslin Kolbe, Scarra Ntubeni, Oupa Mohoje and Nizaam Carr also got little chance to shine ahead of the World Cup despite preforming well for their clubs.

Being a World Cup year, it seems players’ frustrations were left unattended for the sake of team unity ahead of the competition, but in November sports minister Fikile Mbalula was clear about what would happen if the Springboks failed to meet future transformation targets. “We will deregister the team, withdraw national colours, and withdraw national funding,” he warned.

While SARU insists Coetzee is 100 per cent behind the transformation targets, to a large degree the former Stormers coach is reliant on the professional clubs giving their black players enough game time if he is to transform the squad while staying competitive.

Media reports say that on the first Saturday of April there were just 38 players of colour in the match-day 23 of the six professional franchises. That number needs to rise to 69 out of 138 to meet the 50 per cent target.

Ehrenreich believes the lack of transformation to date stems from both individual and systemic racism, and for the transformation plan to work, its enforcement by an independent body is needed.

“When it comes to the franchises there is a weakness there in terms of oversight to ensure they comply with transformation. And in this regard the team’s commercial sponsors should play a role,” he insists.

Lilford is also unsure if Coetzee is the right man to oversee the implementation of the transformation agenda.

Lilford sees him as an old-style rugby coach who values players who have proved themselves rather than one who will try untested talent.

“I think Springbok rugby is going to be in a confusing space over the short term. But if the new coach is going to bring in untested black players, then the best time to do it is in the first year of his tenure and against touring sides when the stakes or not as high,” he says.

Coetzee has no choice but to rebuild the national team following the retirement of Victor Matfield, Jean de Villiers and Fourie du Preez. So maybe opportunity is knocking more loudly than ever before for an Irish rugby team that has never won a Test in South Africa.