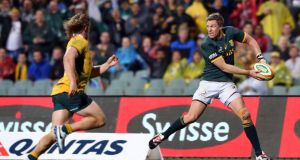 Springboks captain Jean de Villiers cannot quite believe that he is about to play his 100th test match, given he felt he might not even get a second after he destroyed ligaments in his knee, seven minutes into his debut.

The centre spent nine months recuperating after that test against France in 2002, returned to play a game as the Springboks warmed up for the 2003 World Cup in Australia, then suffered a shoulder injury.

He then spent another eight months in rehabilitation and explained today that as a young man his resolve to return to top-class rugby had been tested.

“Yeah, it has been a long road,” he said ahead of the Springboks’ Rugby Championship clash with New Zealand on Saturday. “There were definitely times when I did not think I would get to number two.

“Making your international debut is always special, getting injured seven minutes into it is not what you dream about.

“Being out for nine months, coming back for the World Cup and getting 15 minutes then getting injured again in the warm-up, another eight months out. You certainly test your character.

“I went through a lot of hard times but I believe I got through it stronger.

De Villiers, who also missed all but 40 minutes of South Africa’s successful 2007 World Cup campaign after tearing his bicep, will become his country’s fifth centurion on Saturday.

Smit and Habana both lost their 100th test matches, something that South African media have suggested is a centurion’s curse.

“To look at the records and to see that John and Bryan lost their 100th, I won’t go down that road,” de Villiers said with a laugh.

“Whether it’s your first or 100th, you play to win and I’d like to think we will be highly motivated to win and do the Bok jersey proud.”

De Villiers was made captain of the national side in 2012 after the retirement of Smit by coach Heyneke Meyer, who was initially reluctant to name a successor to the hooker with Schalk Burger, who many had tipped to be his first choice, out injured.

The thoughtful de Villiers has since set the tone for the team in the past three seasons, keen to ensure the side provides inspiration to more than just those in the rugby-supporting strongholds.

“What I have tried to tell the young guys in our team is what we stand for is that we compete when we put the Springboks’ jersey on, we give our all every time we play and make south Africa proud,” he said.

“We are a team for everyone in South Africa, a team that all the kids can really aspire to and relate to.”

1 Dr Claire Molloy: ‘It is a privileged place to be, on the frontline’
2 Garry Ringrose to stay with Leinster as he signs two-year central contract
3 Rory McIlroy admits Portrush nightmare was catalyst for his return to the top
4 Sky Sports customers save on bills; rule changes could change rugby utterly
5 ‘For 25 minutes I ran out of oxygen’: Pepe Reina on his coronavirus battle
Real news has value SUBSCRIBE