South Africa aim to bounce back as redemption beckons against Samoa 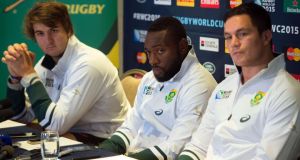 The Mirror at MidnightSouth Africa

“Getting a team of sixteen oxen to pull a wagon up a rocky, roadless mountain was hard enough; coming downhill was still worse – especially in torrential winter rainstorm. When heading down mountainsides, men shoved boulders out of the way then hauled back with all their weight on leather straps attached to the back of the wagons to keep them from careering downhill on top of the oxen. On the steepest hills the trekkers took the back wheels off their wagons and chained big logs onto the axels as brakes. Even these efforts were sometimes not enough: paintings and drawings of the Great Trek show many wagons overturned and shattered on the rocks.”

The lesson: Springbok power can be overturned and shattered, yet their inherent iron will remains unbreakable. They come from stern stock and not just the Dutch descendants in South Africa’s 31-man squad.

Modern South Africans still live in a pressure cooker environment. They were unified under the Springbok emblem in 1995, felling the All Blacks as Francois Pienaar (who crassly declared he was going for sushi during Saturday’s match) and Nelson Mandela shared the William Webb Ellis trophy.

That being the Rainbow nation’s sporting peak, they currently lie wounded in its darkest valley.

To sift through the wreckage of their loss to Japan we enter the Hyatt Regency hotel on a grim Birmingham morning. There sits Bryan Habana. We introduce ourselves to the 2007 world player of the year who grimaces back like a prisoner.

Wayne Barnes, the ultimate disciplinarian, will referee at Villa Park.

Francois Louw is the Bath flanker whose haunted expression was spread across every television screen as the curtain fell in Brighton. “There is no explanation,” said Louw. “The reality is we lost our opening game of the World Cup. Our backs are against the wall now.

“I don’t think you can underestimate any teams in the World Cup. I don’t think we ever did. There is a massive task ahead of us but it is still in our grasp to go through the pool games, to qualify for the quarter-finals.”

They will probably still top their group. The odds remain stacked in elite nations’ favour. Japan have a tough four-day turnaround before facing a freshly primed and forewarned Scotland at Kingsholm.

Louw offered a defiant yet humble stance. “I don’t believe we necessarily played a bad game. I don’t think we undercooked it at all. We had our moments, a lot of opportunities, just didn’t finish them.”

Over-confident? “Japan is a solid side . . . We knew it would be a tough game as we got a couple of guys who play their rugby over in Japan with their boys so we know their mentality, knew they were a strong defensive side. Attacking, we got caught tight and they beat us around the outside.

“It wasn’t complacency, we didn’t underestimate them, they outplayed us. The so-called top nations can fall. It was not a great moment in South African rugby history. It is what it is. We need to face up to reality and turn that around.”

In 2010 an ANC member of South Africa’s national assembly questioned Tendai Mtawarira’s validity as a Springbok because he was born in Zimbabwe.

“Most of us have been through adversity,” said the prop they call Beast. “It is really going to be a test of character this week and that character has to be shown on Saturday in 80 minutes of rugby.”

Lood de Jager was inconsolable following Saturday’s loss but the huge 22 year old lock now seems primed to shove boulders. “No, it’s not too late. Definitely not too late.”