Scotland’s Richie Gray ruled out of rest of Six Nations 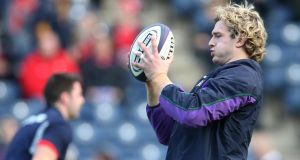 Scotland lock Richie Gray has been ruled out of the rest of the Six Nations with an arm injury. (Photograph: Ian MacNicol/AFP/Getty Images)

Scotland have been hit with a fresh injury blow after lock Richie Gray was told his Six Nations Championship is over.

The Castres forward suffered an upper arm injury during Sunday’s 26-23 defeat to Wales at Murrayfield and scans now show it will be 12 weeks before he can resume playing duties.

The news that he will miss the remaining fixtures with Italy, England and Ireland comes just a day after prop Jon Welsh — who scored a late try against the Dragons — has also been ruled out of the remainder of the competition with a fractured hand.

The Scottish Rugby Union confirmed Glasgow Warriors second-rower Tim Swinson has been called in to replace Gray, who has performed impressively alongside brother Jonny in the Dark Blues’ opening two games against France and Wales.

In a statement, the SRU said: “Yesterday’s scan at Spire Murrayfield Hospital revealed that the 45-times capped Scotland and British & Irish Lions lock Gray damaged a tendon in his arm during the national team’s loss to Wales on Sunday.

“He will require further surgical consultation on his return to his club, Castres, in France, however he is expected to be unavailable for selection for the next three to four months.”

With Gray ruled out, Scotland head coach Vern Cotter has drafted Swinson into the squad for the remainder of the international campaign.

The nine-times capped second-row, who turned 28 on Tuesday, scored a try in the Warriors’ 54-10 defeat of Zebre in Parma on Sunday, helping his club return to the summit of the Guinness Pro12.

If selected, it would be his first appearance for his country since the summer tour after calling off on the eve of Scotland’s autumn Test with New Zealand with a back strain.

It was also confirmed by a scan at Spire Murrayfield Hospital that Glasgow Warriors loose-head prop Gordon Reid has sustained a tear to his medial collateral ligament.

The SRU statement added: “He will now undergo a period of clinical support, assessment and rehabilitation. His return-to-play date will become clearer, and subsequently communicated, as he progresses in the coming weeks.”