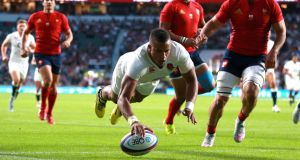 Anthony Watson goes over to score his and England’s second try during the World Cup warm-up match against France at Twickenham. Photograph: David Davies/PA

Sam Burgess and Henry Slade played themselves into World Cup contention as England marked their 100th meeting with France with an edgy victory at Twickenham.

The tries were supplied by Anthony Watson and Jonny May, but with the dazzling wings certainties to be present at the global showpiece on home soil, all eyes were on the uncapped centre pairing.

Burgess produced a couple of wince-inducing hits, carried well and looked comfortable in the Test arena just 10 months after completing his move from rugby league.

The only stain on his performance was a first-half yellow card that exposed his lack of union nous as he tugged back Morgan Parra after the France scrumhalf had taken a quick-tap penalty.

Slade was also impressive, showing the handling and vision that have been his calling card at club level, and the subtlety of his skill set complimented the physical prowess of Burgess.

Head coach Stuart Lancaster has stated it is highly unlikely both centres will be selected in his final 31-man World Cup squad and on this evidence it would be a tough call to include one at the expense of the other and both will be looked at again.

England sparkled across the backline, Watson and May injecting pace and finishing their chances and fullback Alex Goode surely guaranteed his place with a creative display that saw him repeatedly operate at first receiver.

Number eight Ben Morgan lasted until half-time in his first appearance since breaking his leg in January and will surely be given another outing in the return match in Paris next Saturday, but hooker Rob Webber and flanker Calum Clark failed to advance their claims.

One setback was the wrist injury sustained by tighthead Kieran Brookes, who went off in the second half after taking a blow that could remove him from World Cup contention.

England had barely touched the ball inside the opening 10 minutes but breached the whitewash with their first meaningful attack, as quick hands from Slade gave Watson a half-chance and the Bath wing accepted by showing a rapid turn of pace to round a terrible tackle by Brice Dulin.

Seven minutes later Watson scored his second after Burgess, Owen Farrell and May combined in the midfield to create space that the 21-year-old turned into a try after a clever jink.

Burgess flattened opposite number Alexandre Dumoulin with a massive tackle, but France continued their attack with Parra landing two penalties that sandwiched a barnstorming run by number eight Luis Picamoles.

Slade was lucky to escape a yellow card for a tackle on Parra while the scrumhalf was in mid-air, but Burgess was sent to the sin-bin in the 36th minute for his tug.

James Haskell emerged instead of Morgan for a second half that began in chaotic fashion, but by the 46th minute England has scored their third try with wonderful hands from Slade instrumental in setting up May.

Clark was sent to the sin-bin for grabbing Guilhem Guirado around the neck while clearing a ruck and England were let off when substitute prop Uini Atonio dropped the ball with the line at his mercy.

Fate was not with the World Cup hosts as the match entered the final quarter, however, as Brookes departed just moments before Fulgence Ouedraogo touched down at the end of a line out drive that scattered white shirts.

Twickenham was silent as France launched a late assault knowing a try would seize victory, but James Haskell secured a penalty and the final whistle was blown.