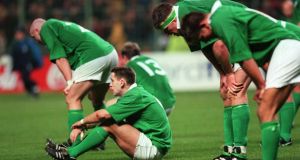 Ireland are dejected after their 28-24 defeat to Argentina in the 1999 Rugby World Cup quarter-final play-off. Photograph: Inpho

The success of the 1995 World Cup inspired the game to go professional later that year and soon rugby began to flourish and expand.

The 1999 tournament would be the first one held under the banner of professionalism, and to reflect the growth of the game and the loosening of the elite’s stranglehold of it the number of participants was increased from 16 to 20.

But the increase in numbers led to a change in format, which would mean the five teams who placed second in their pool, as well as the best placed third side, would have to win a play-off in order to reach the quarter-finals.

So having finished second in Pool E after being hammered by Australia, Ireland would have to negotiate a tricky tie against Argentina in order to reach the last eight.

The 1999 tournament was spread between host nations Wales, Ireland, Scotland, England and France, but having played their three group games at Lansdowne Road Warren Gatland’s men were stripped of home comforts for the play-off which was held at the Stade Felix Bollaert in Lens.

Prior to the tournament Argentina had only won one World Cup game in nine attempts, but the prospect of playing Ireland on neutral soil gave them an added confidence.

The Puma scrum-half Agustin Pichot said before the game, “The nations of Great Britain and Ireland always make such a big point about home advantage that they never, ever, feel comfortable playing away from home. Ireland coming out of Dublin to play will have a problem about playing in France.”

And so it proved. In a drab encounter Ireland had moved into a 21-9 lead in the middle of the second half, all their points courtesy of David Humphries’ boot.

Argentina’s points had also come exclusively from their kicker, Gonzalo Queseda, until the Pumas landed the game’s telling blow in the 75th minute. Winger Diego Albanese went over for the only try, and Queseda converted before knocking over a penalty.

Ireland were losing 28-24. In the final 30 minutes they had been outscored 19 points to three.

In eight agonising minutes of injury time Ireland laid siege to the Argentinian line but couldn’t break through. Ireland’s World Cup had ended in disappointment yet again.