Noves brings in Vakatawa from leftfield 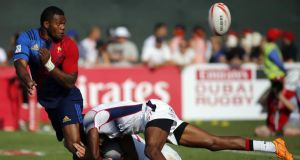 New France coach Guy Noves has made a bold choice by picking Sevens stalwart Virimi Vakatawa on the wing in a new-look team to face Italy in their opening Six Nations game at home on Saturday. Fijian-born Vakatawa, who has not played any 15-man rugby since 2013, will make his first appearance in a side containing four uncapped players.

Sebastien Bezy also makes his debut at scrumhalf and will pair up with number 10 Jules Plisson in the absence of the injured Morgan Parra and Francois Trinh-Duc, who was deemed not fit enough when Noves assembled his squad last month. Centre Jonathan Danty and lock Paul Jedrasiak are the other uncapped players brought in by Noves, who took over from Philippe Saint-Andre after last year’s World Cup.

Vakatawa “has got shortcomings, but the sooner he starts with the squad the better,” Noves said on Thursday. Asked if the team were not too young, with the eldest being 30-year-old flanker Damien Chouly, Noves replied: “I have no fear. We all have to start some day. The most important thing is to have good people around you.”

Noves has a huge task ahead after Les Bleus were left in tatters following a record defeat against New Zealand in the quarter-finals of the World Cup. “I am bothered that we’re talking about the World Cup again. The point is not what the players did yesterday, but what they will do in the future,” said the former Toulouse coach.

It will be the first match at the Stade de France since the November Paris attacks when three suicide bombers struck near the stadium, part of a wave of coordinated attacks that killed 130 people.