Nigel Carolan names Ireland U20 side for opener against Wales 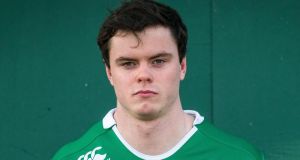 Ireland coach Nigel Carolan has named three of last year’s side for the opening Under-20 Six Nations Championship game against Wales at Donnybrook on Friday night (7.35, live on RTÉ 2).

The entire frontrow of Andrew Porter, Adam McBurney and Conan O’Donnell all have experience of this level while a fourth, wing Jacob Stockdale, will play for Ulster in their Guinness Pro 12 re-fixed match against the Dragons on Friday night, before linking up with the age-grade national team.

Lansdowne’s James Ryan leads a team that will be hoping to avenge two defeats to Wales last season, in the Six Nations and then again at the World Cup. Carolan has decided to name Connacht secondrow Cillian Gallagher at flanker in anticipation of a robust physical challenge from the visitors.

The Irish coach explained: “We’ve been training well and the players are integrating nicely. While the majority of the lads taking to the field on Friday will not have played at international level before, they have got good experience at provincial level and this has shown in their preparation over the last number of weeks and they’re all looking forward to getting out there.”